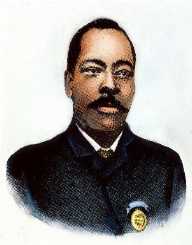 Granville Tailer Woods was born 23rd April 1856, to Cyrus Woods and Martha Brown. Woods and his brother were born in Columbus, Ohio, in the United States. His father was African American, and his mother had Native American in her bloodline.

Woods studied at school as a youngster but left when he was ten years old. His family lived in poverty and Woods worked to contribute.

He joined a machine shop as an apprentice, learning how to be a machinist and a blacksmith.

In 1872, Woods found a job on the railroads in Missouri as a fireman. He then graduated to an engineering position.

Woods moved to Illinois in 1874 to join the Springfield Iron Works company.

He enrolled in college in 1876 to study mechanical and electrical engineering, and he graduated in 1878.

Woods went to work on a steamboat called Ironsides. Two years later, he rose to the position of Chief Engineer.

In the early 1880s, Woods returned to Ohio. He joined the railroads again as an engineer, but shortly after he started his own business. He was an inventor as well as an electrical engineer.

Woods moved to New York City in 1892 to run his company. His brother Lyates joined him. Lyates was also an inventor.

During his years as an inventor, Woods submitted over 50 patents.

One of his inventions allowed both voices and messages to travel over one wire. Called telegraphony, Woods sold the rights to the American Bell Telephone Company.

Another of his patents was for a telegraph that let messages transmit between moving trains and train stations.

Thomas Edison made claims twice against Woods, claiming ownership of patents Wood had submitted. Woods defended his submissions successfully on both occasions. Edison admitted defeat and offered Woods a job, but Woods declined.

Woods sold several of his inventions to companies like General Electric and Westinghouse.