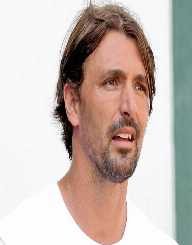 Croatian professional tennis champion Goran Ivanisevic was born in Split, Croatia on the 13 September in 1971 to Srdan Ivanisevic and Goran Skaricic. As a child, he showed sporting talent and played tennis as well as football.

In 1988 Goran Ivanisevic was ranked number three in the world as a junior player. He also reached the semifinals in both the French and US Opens. He turned professional in 1988 and qualified for the Australian Open in 1989, reaching the quarterfinals. Then in 1990, Ivanisevic beat Boris Becker in the French Open men’s singles and went on to reach the quarterfinals. The same year, he was runner-up in the French Open doubles with Petr Korda.

Goran Ivanisevic rose to prominence when he reached the Wimbledon final in 1992 and lost in five sets to Andre Agassi. In 1994 he entered the Wimbledon final again and lost to Pete Sampras. By this stage, Ivanisevic was ranked number two. In 1995 he beat Todd Martin to win the Grand Slam Cup. He failed to Sampras again at Wimbledon. In 1996 representing Croatia with Iva Majoli, Ivanisevic won the Hopman Cup. In 1998, he suffered a third time to Sampras at Wimbledon. In 2001, he beat Patrick Rafter to win Wimbledon, becoming the first player ever to have won as a Wild Card entry.

Ivanisevic retired with a record of twenty-two singles titles and nine doubles. His highest ranking was number two. He also carried the flag for his country at two Olympic Games: Seoul in 1988 and Barcelona in 1992.

Due to injuries, Ivanisevic retired in 2002, returned to the game and retired permanently in 2004.

Ivanisevic won the BBC Overseas Sports Personality of the Year award in 2001.

Goran Ivanisevic married Tatjana Dragovic in 2009, and the couple had two children together. They divorced in 2013.

Since his retirement from professional tennis, Ivanisevic has worked as a coach and mentor and is also involved with masters and exhibition tournaments. One of his pupils is Marin Cilic.

Ivanisevic is a keen football fan and supports his hometown club Hajduk Split as well as West Bromwich Albion in England.

Goran Ivanisevic has been involved in charity work over the years including the Hep Children in Need organization in Croatia.