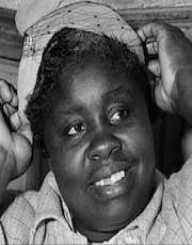 Georgia Teresa Gilmore was born on February 5, 1920. She was an African American from Montgomery in Alabama. She participated in the Montgomery Bus Boycott selling food to the people at the boycott’s mass meetings with the intent of fundraising.

Her efforts sustained the boycott that lasted for a long time. Other groups also started raising money after her efforts proved beneficial. She died on March 3, 1990.

Georgia Teresa Gilmore was born on February 5, 1920. She worked and lived in Montgomery in Alabama, United States of America. She was a midwife with six children. Georgia was a kind, motherly, compassionate and charitable person.

However, despite her positive traits, she had a nasty temper. She reacted violently to people who supported racial injustice. She was among people who resisted discrimination in buses.

Georgia Gilmore dared to confront any white man who thought he was great or superior to her. Before the boycott began in 1955, she worked as a cook at the National Lunch Company, Montgomery.

The Montgomery Bus Boycott started in 1955 after Rosa Parks was arrested for failing to give up her seat to a white who was standing. The boycott was organized by the Montgomery Improvement Association. Georgia resisted taking buses even before the boycott began. When she heard about the mass boycott, she joined the association.

Georgia Gilmore was loud when it came to racial discrimination. Georgia would speak her truth to anyone including the white bus drivers. Her public declarations about racial bias led to her being fired from her job as a cook at the National Lunch Company.

Martin Luther King Junior and other members of the association helped Georgia set up a restaurant at her home. The restaurant became her source of livelihood. She later established the fundraising effort, Club from Nowhere

Georgia Gilmore started her fundraising efforts by preparing sandwiches and serving them to people who participated in the boycott. The effort was a success, and so Georgia and her friends started making full meals such as cakes and chicken dinners among other meals.

The proceeds from the venture helped the Montgomery Improvement Association and also sustained the boycott. The effort sold food all over Montgomery hence raising hundreds of dollars every day. She remained the only officer recognized in the group for safety purposes.

Life after the Boycott

Georgia Gilmore played a role in the documentary ‘Eyes on the Prize’. Her recipes were appreciated, and to date, some of her recipes appear in several cookbooks. She also participated in the Selma March where she made food for the commemorators. She died on March 3, 1990, at the age of seventy.