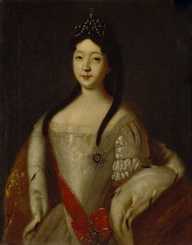 Elizabeth of Russia was undisputed, one of the country’s most famous and powerful monarchs who led Russia in the war of Australian Succession as well as The Seven Years’ War. Also known as Yelizaveta Petrovna, Elizabeth of Russia ruled as the Empress from 1741 to 1762.

Elizabeth of Russia forcefully took the throne and is also famous as the founder of Russia’s first University. During her 20 years on the throne, Elizabeth forged strong ties in Europe.

Elizabeth of Russia was born on 29th December 1709 to Peter the Great and Catherine I in Kolomenskoye, Russia. She was named Yelizaveta Petrovna and was very beautiful. At the time of her birth, her parents were not yet officially married. Moreover, she was an intelligent child who grew up in a loving and supportive environment.

Elizabeth of Russia never received any kind of formal knowledge. Hoping for a later union with King Louis xv, she studied French Culture. However, the King’s family rejected her due to her mother’s bloodline.

Elizabeth of Russia also had a dancing talent and was fluent in German, French and Italian. Her father died in 1725 and her cousin Ann took over as the Empress.

In the year 1740, her cousin Ann died, and Elizabeth of Russia alongside many Russians thought she would take over as the new Empress. This was, however, not the case as the Russian Supreme Council failed to approve her quest and instead chose a 2-month-old son of Ann Leopoldovna called Ivan 4, his mother becoming the regent.

In 1741, Elizabeth of Russia being unhappy with the then corrupt and weak Russian government, organized and staged a coup with her allies in the military that brought to an end the reign of the infant Emperor and his mother. The coup was successful without bloodshed.
On 25th April 1742, Elizabeth of Russia was officially crowned the new Empress.

As the new empress, Elizabeth of Russia was more popular than her predecessor. She disbanded the Supreme Council and replaced it with the Senate. She also carried out a major reshuffle and appointed locals to replace the foreigners who held top positions in the government.

As the patron of arts, she founded the first Russian University. Elizabeth held Russia through two major European conflicts, i.e., The War of Australian Succession and The Seven Years’ War between 1756 and 1763.

These two wars involved most of the world’s powerful countries, and Elizabeth was able to ally with Australia and France that worked against Prussia successfully. With the help of her advisers, she successfully negotiated and brought to an end a land dispute that had been there for a long period between Russia and Sweden.

Elizabeth of Russia also improved the relationship between Russia and Great Britain leading to Russia’s increased growth to become a major European power.

Elizabeth of Russia was also a highly religious empress who contributed to major cultural and social advancements. She donated large sums of money to the Russian Orthodox Church – a move that was welcomed by the citizens.

Elizabeth of Russia also created a foundation for the arts. Moreover, she abolished the death penalty in Russia. She became one of Russia’s most celebrated rulers who was believed to have inherited several leadership qualities from her father.

During the Seven Years’ War, her health steadily deteriorated and she died when the war was still ongoing.

Even though Elizabeth of Russia dated several men as a young woman, she never got married and had no children. Because she was born before her parent’s official marriage, many people, especially from noble families considered her an illegitimate child. As a result, it became difficult for her to get a suitor from a royal family who could marry her.

Since she would have been required to forfeit her claim to the throne should she have decided to marry a commoner, she decided to remain single for life.

As a young woman, she disliked women who appeared to be more beautiful than her. She extravagantly spent on clothes and other lavish products and was very beautiful.

In late 1750, Elizabeth’s health started deteriorating. The doctor prescribed some medicine for her, but she adamantly refused to take them.

As a result, she died on 15th January 1762. Elizabeth of Russia had, however, named her nephew Peter as her successor long before her death.

Her body was burned in St.Petersburg at the Peter and Paul Cathedral. After her death, her selected heir Peter became the new emperor but was killed a few months later. His wife Catherine took over and also became quite successful.