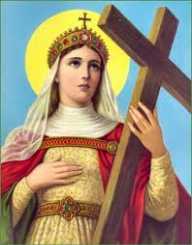 Flavia Julia Helena was born c. 248 in Helenopolis, Bithynia, and Pontus. The area was part of the Roman Empire and is in current day Turkey.

Relationship with the Emperor

Historians disagree about the relationship between Flavia Julia Helena and the Emperor Constantius.

Historian Jan Drivers believes the couple took part in a common-law marriage, and other scholars support his view.

In contrast, another historian, Timothy Barnes believes an official marriage took place due to the sources being more reliable.

On 27th February c. 272, Helena gave birth to a boy, Constantine I, who would be the future emperor.

Constantius divorced Flavia Julia Helena in the late 280s. Due to his growing status, he decided he needed a wife more befitting. As a result, he chose Theodora, the daughter of one of his soldiers.

Helena and Constantine moved to the court of Diocletian at Nicomedia. Constantine became a member of the court's inner circle after growing old. He was also very close to his mother, who had never remarried.

Constantine ascended the throne after his father died in 306. He became known as Augustus of the Roman Empire, and his other name was Constantine the Great.

In 312, Flavia Julia Helena returned to public life at the request of her son. In 325, she received the title of Augusta and converted to Christianity.

Travel to the Holy Land

Constantine gave Flavia Julia Helena the task of locating relics of the Judeo-Christian tradition. She received unlimited access to the treasury to help her.

Around 326, Helena went to Palestine to visit holy sites. During her trip, she managed the building and beautifying of the two most important churches. The first was the Church of the Nativity in Bethlehem, where Jesus was born. The second was the Church of Eleona on the Mount of Olives, where Jesus ascended to heaven.

Titus destroyed Jerusalem in AD 70, but Flavia Julia Helena assisted with some of the rebuildings. In particular, was the site of Jesus's tomb at Calvary. Titus built a new temple there, but Helena had it destroyed.

There were three crosses found nearby. As a result, Helena had the crosses tested. After a miracle happened, Helena named one of the crosses as "the true cross." Due to the miracle, Helena oversaw the construction of the Church of the Holy Sepulchre at the site.

Flavia Julia Helena continued to build churches as she traveled across the Holy Land.

She went to Cyprus as part of her trip, and some of the relics she discovered remained in Cyprus. Relics included a piece of Jesus's tunic and pieces from the holy cross. There were also parts of the rope that had been used to tie Jesus to the cross.

Helena went back to Rome in 327 with some of the relics she still had. As a result, they are still on display today in the private chapel of her palace.

Several churches recognize her as a saint. These include the Roman Catholic Church, the Anglican Communion Church, and the Lutheran Church, among others.

Constantine renamed the city of her birth as Helenopolis.