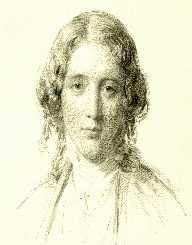 Caroline Jones Chisolm was born on the 30th of May 1808 in Wooton, a village south of North Hampton. She was the thirteenth and last child of a well to do pig farmer, William Jones, and his fourth wife, Caroline. The previous wives had died in childbirth or through illness. She lost her father at the age of six. He had already made a lasting impression on her before his death. Caroline was trained in the tradition of philanthropy from an early age. She was brought up to see it as a regular part of her daily life. He had once brought home a maimed soldier and told his family that it was their responsibility to take care of the man who had fought for them.

When she met her husband, Captain Archibald Chisholm, she agreed to marry him on the condition that she would be able to continue in her philanthropic life. This he was eager to do. In the years of their marriage, he proved to be a worthy ally, partner, and motivator in her efforts. They got married in 1830. Caroline was twenty-two at the time while her husband was thirty-two. The couple lived together in Brighton but moved to Madras, India when the husband was to return to his regiment. He went in 1832, and she joined her husband eighteen months later.

Caroline Jones Chisolm was born Protestant. She converted to Catholicism when she married her husband because he was Catholic. This decision to convert was a thorn in her flesh through her years as a philanthropist. There was a general distrust at the time for Catholics, and she faced a lot of resistance because of this. She, however, remained a devout Catholic all her life.

As someone who was always looking for a means to improve her world, no sooner had Caroline Jones Chisolm moved to Madras that she had found a problem that needed correcting.

She noticed that the young girls and ladies of the place were picking up bad behavior from their exposure to the soldiers. They needed to have an occupation under supervision. She wanted to start a school. Her appeal to the governor of Madras yielded no support. She forged ahead notwithstanding and set up the Female School of Industry for the Daughters of European Soldiers in 1934.  There she taught reading, writing, cooking, housekeeping, nursing, etc. The school was so successful that the soldiers started asking their wives to attend as well.

Caroline’s most prominent philanthropic work that spanned the rest of her life came later. In 1838, her husband was given two-year sick leave. They decided that the climate of Australia would do his health better. Thus began their several month's sails to Sydney. On the way there, Caroline was confronted with the problematic circumstances being faced by emigrants from England to Australia. Her mind had already begun to work on ways by which their lives may be made better.

Caroline Jones Chisolm was most occupied with the fate of women who arrived without money or connections which left them working the streets to make ends meet. Also, Sydney was at the time what seemed to be a city of Emancipists. She worried that the vast disparity between male and female population would lead to amorous acts. She began to seek ways to bring in more women, especially the wives of the emancipists.  She did not seek for religious or government assistance so as not to be tied down to dogmas and policies.

Caroline just wanted help the needy. Her efforts were funded by herself and through subscription. Upon her husband’s return to the military service, he encouraged her to remain and continue with her excellent work. She began to push to promote even whole families to emigrate. Then she pushed for them to be dispersed into the interior lands. She set up homes and shelter to help them get settled in.

She faced a lot of challenges. There was lack of support. There were also efforts to sabotage her work by wealthy landowners who worried about losing their hold on the land if poor farmers became employers of labor. There were also people who distrusted her Catholicism.

Caroline Jones Chisolm raised a lot of awareness, changed policies and was able to enlist a lot of support over time. In all her years she fought for the improvement and development of Sydney. She helped improve the lives of poor Emigrants from England, farmers and gold prospectors.

By 1842 she was able to close the shelters she had established because her aim to get emigrants settled in the interior was already successful.

Caroline Jones Chisolm recognized the potential of near barren Australia with her forward thinking and progressive mind. She contributed largely to what is now a bustling city in New South Wales. She is well known and respected.

Her efforts were so recognized that educational and government facilities in Australia and England were named after her.

In honor of her work, the Church of England dedicated the 16th of May to her in the Calendar of Saints. There have also been proposals that she should be recognized as a saint.

Caroline Jones Chisolm was a dedicated woman. She was undaunted by the lack of support she received in her efforts. Whenever she was unable to get her way one way, her ingenuity and doggedness made her seek another. Her dedication to her work may have made her be perceived as hard. It was said that a character, Mrs. Jelleby, in Charles Dickens’ Bleak House was created after her and two other women. In her case, it was to depict what seemed like what he perceived as her a hard, unsympathetic persona.

Caroline Jones Chisolm developed kidney complications in 1857.  Her health improved in 1859. She finally died on March 25, 1877. Her husband died in August of the same year. She was survived by five of her eight children.