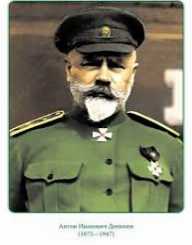 Anton Ivanovich Denikin was born on December 16, 1872, in a village near the city of Wloclawek, Warsaw Governorate, Russian Empire. His father, Ivan Efimovich Denikin, was a Russian army officer. His mother, Elzbieta Wrzesinska, was a Polish seamstress. His family was quite poor.

Anton Denikin began his education in several public schools. He often tutored younger classmates to earn money for his family. In 1892, he graduated from the Kyiv Junker School. In 1895, he enrolled at the General Staff Academy in St Petersburg. He quit the academy after failing to meet the academic requirements.

In 1905, Anton Denikin took part in the Russo-Japanese War. When World War I broke out, he was the chief of staff of the Kyiv Military District. He then joined the front as a member of the 4th Rifle Brigade. In 1916, he led troops in Romania and commanded the Russian 8th Army Corps. After the February Revolution, he was the Chief of Staff to Aleksei Brusilov, Mikhail Alekseev, and Lavr Kornilov. He also commanded the Southwestern Front.

After the October Revolution, Denikin escaped to the city of Novocherkassk in the Northern Caucasus. He joined up with other officers and formed the Volunteer Army, also called the White Army. Their goal was to defeat the Bolsheviks. In April 1918, Denikin became the commander of the Army. He led the Second Kuban Campaign, conquering the area between the Caspian Sea and the Black Sea. In 1919, he partnered up with the Black Army, a Ukrainian anarchist group. He tried to capture Moscow, but the Red Army ultimately defeated him. His forces began to retreat to Crimea.

In 1920, Anton Denikin left the Soviet Union and spent some time living in Turkey, England, Belgium, and Hungary. From 1926 to 1945, he lived in France. He wrote three books regarding his experiences during the White movement. They were titled The White Army, The Russian Turmoil, and The Career of a Tsarist Officer. In 1945, he left France and moved to the United States.

The Russian Federation awarded Anton Denikin with the Orders of St Anne, St Stanislaus, St George, and St Vladimir. He also received commendations from Romania, France, and the United Kingdom.

Anton Denikin married a woman named Xenia Vasilievna Chizh. They had a daughter named Marina Antonovna Denikina. She went on to become a writer and journalist. She wrote a book about her father, titled My Father is General Denikin.

Anton Denikin died of a heart attack near Ann Arbor, Michigan, on August 8, 1947. He was 74 years old. He initially had a military funeral in Detroit. Later, his body was moved to St Vladimir’s Cemetery in Jackson, New Jersey. In 2005, his remains were transferred to the Donskoy Monastery in Moscow.