What Do Birthmarks & Moles Tell?

What Do Birthmarks & Moles Tell?

Birthmarks and moles, most people have one or the other or many of both. Why is this? More importantly what do certain coloured birthmarks mean if anything? As for those sometimes unpleasant looking moles, where do they come from and do they have any astrological meaning in our lives?

Many of us are born with these mysterious, sometimes odd colored blotches called birthmarks. We kind of treat them with affection as they are signs of when we were born, all those years ago! A special time for us and our parents and loved ones as we came into this world, unknowing, innocent and fighting for air!

Birthmarks are generally said to be vascular blotches, caused by abnormal blood vessels under the skin at birth. But now we know what they are, why do we have them and can they tell us anything?

This article sets out to try and understand if perhaps there is some more important meaning to our varied and unique birthmarks.

In Spanish, Italian and some Arabic countries birthmarks indicate a mother who was unsatisfied due to an unmet craving during pregnancy. Perhaps she wanted strawberries or chocolate. It is interesting that some birthmarks are called strawberries due to their red strawberry shape.

However for those people who believe in reincarnation a birthmark may be said to represent what killed you in a past life! This is a very interesting perspective.

There are apparently real life cases where someone may have a red blotch around their ankle indicating someone dragged them in their past life. The most vivid are cases in India where children are born with very unique, distinguished coloured birthmarks.

One boy in India had a brown jagged birthmark all across his neck from birth. Apparently he kept telling his parents he was murdered with a knife across his throat! He even said he knew where the murderers lived. He took his parents there and they were apparently arrested for his prior life murder! He had actually lived as someone else according to the reporters of the story!

All of this certainly throws more seriousness on people’s birthmarks but of course it is only believable if you believe in the after life and especially reincarnation.

Some fortune tellers do believe that the while birthmarks may not tell a lot, moles may make up for it.

Moles in Astrology and Determining a Person’s Life 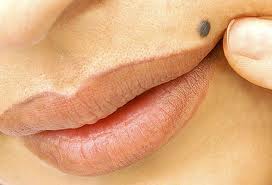 In Indian and Chinese astrology, moles present on the body and their position indicate the exposure of the baby in the womb to the planets. An example would be if the planet had a masculine sign when the foetus was exposed to it, the mole would be formed on the right hand side of the baby’s body. If the planetary influence was feminine it would form on left hand side. Combinations of planetary positions results in moles in specific body parts.

This is all very interesting but what about the astrological meaning of moles? Well according to Indian and Chinese astrology moles to tell the future of a person, this is according to their shape, colour and whether flat or raised.

For example moles that are red, honey yellow or green indicate good fortune. Black coloured moles are bad fortune. Small moles mean nothing but larger moles do indicate something. Unusually shaped moles may generally produce a combination of good and bad results in life.

When it comes to where the mole is placed here are some guidelines on what they mean:

A mole that is situated on the right side of a person’s head and is visible means they will be successful in politics.

However a mole on the forehead of a person indicates they will have wealth (financial) in life.

Meanwhile a mole between the eyebrows infers leadership qualities, if a mole is on the left eyebrow this is unlucky in terms of finances.

Moles on the shoulder represent brave and courageous people who follow all their work projects through tenaciously.

Unusually placed moles such as on the buttocks indicate they will be an artist, although if it is on the left buttock they will have a poverty stricken life. As for thighs a mole here indicates a man will go abroad and have a beautiful lady. Meanwhile a sensitive placed mole on the genitals will mean that not surprisingly the person will have a rather strong interest in sex and of course have a lover!

Other unusually placed moles such as on the tongue indicates obstacles in learning and general health problems whereas a mole on the lips indicates a person who is kind and good to everyone.

So now you know, your birthmark may well indicate how you died in a past life, what food your mother denied herself during pregnancy.

On the other hand your moles may indicate your prosperity yet to come, you new career or explain why you never picked the winning lottery ticket!