Gemini As A Father Personality Traits

Gemini fathers are carefree and playful, heavily influencing those that surround him.

This allows him to form an emotional bond with his children, bringing them closer together.

The Gemini father personality loves to spoil his children but does not know how to set boundaries and rules for them to abide by. 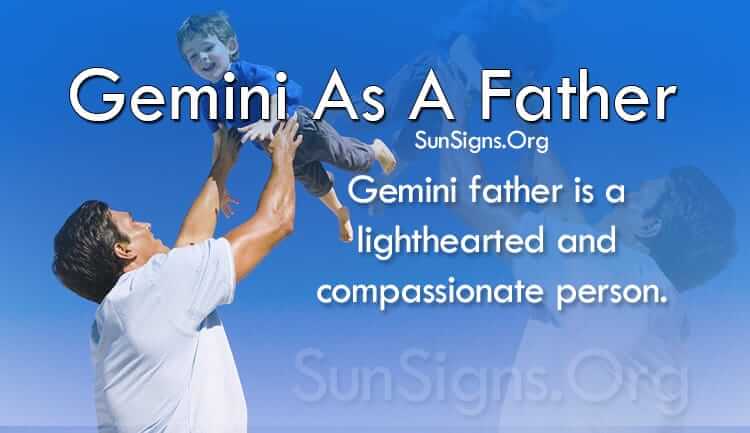 Variety is the Spice of Life

Very much like the Gemini mother, the Gemini father personality traits show he is a lighthearted and compassionate person, bringing joy into the lives of others. He also requires constant movement. He enjoys the feeling of change and new experiences. Allowing variety into his life is of utmost importance and rarely does he ever stick with a monotonous routine for too long.

If allowed enough personal space and help, the Gemini man will transition nicely into fatherhood. The mother of his children plays a crucial role in assisting with establishing a set routine so that the Gemini dad does not feel too tied down.

The Gemini father traits also show that hiring a babysitter once in a while will also help take the pressure off of his poor partner! He is actually quite sweet, patient and trusting of his children! He is never the last to tend to a disappointed face and always the first to put a smile on his family’s face. He simply loves to spoil the little ones!

The Gemini father characteristics show he values close friendships nearly as much as his desire for variety and freedom. That is saying a lot! Whether it is a friendship with his children, partner or friends outside of the family, he wants to be the one to make everyone laugh and especially the one that they can all depend on. Though the mind of a Gemini man is fickle, he will always be faithful and trustworthy to his family and well-established group of close friends.

No Rules Over Here!

The Gemini father personality traits show that with such a spirited and liberal mindset, he has a hard time instilling any sort of discipline or setting boundaries for his children. He is never harsh with them. Not even when they start getting calls from school demanding some change or explanation for their bad behavior.

The Gemini father traits show he wants his children to think of him as the happy, fun-loving parent that they can confide in instead of the mean and strict one. This is doubly true when it comes to his daughters! He favors his daughters over his sons and treats them as if they are his little princesses. He is as lenient as can be and he believes in letting his children have as much space and freedom as they please.

This certainly will cause a lot of headache for the parents when the children become teenagers. Some may say that Gemini men are a little too trusting of their children because they treat them as friends. That is just the nature of the Gemini male! Anything goes under the “rule” of the Gemini father personality.

Granting the kids with all this freedom and no boundaries, issues of rebellion may arise, starting at a young age. The children will learn that they will be able to pout their way out of anything and play on the emotions of their father for sympathy. The Gemini parent will need A LOT of support – nearly 100% from his partner to figure out some boundaries and course of action for the children. The Gemini father characteristics show he needs his partner to be the disciplinarian in the family to avoid being the “bad guy”.