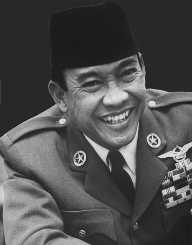 The Face of Indonesian Independence: Sukarno

Sukarno (spelled Soekarno) was born on June 6, 1901, in Surabaja (present Surabaya), East Java, Dutch East Indies. He was the only son of a Javanese school teacher, Raden Soekemi Sosrodihardjo. His mother was a Balinese woman called Ida Ayu Nyoman Rai. He was initially named Kusna Sosro and was renamed by Javanese customs after surviving a childhood illness. He went by his single name without any surname like most of the traditional Javanese people.

In 1912, Sukarno was sent to a Dutch primary school in Modjokerto. In 1916, he got enrolled in a secondary school in Surabaya. During the period of his study in Surabaya, he lived in the house of a prominent Islamic leader and head of Sarekat Islam, Omar Said Tjokroaminoto. Tjokroaminoto treated him as his favoured adopted child and protégé, arranged for his educational expenses and eventually married him off with his 16-year-old daughter Siti Oetari. Sukarno was 20 years old at the time of his marriage.

In 1921, Sukarno graduated from the Institute of Technology, Bandung and emerged as a civil engineer. But instead of joining the bandwagon of the job aspirants, he embarked upon a political career. He wrote and published several articles emphasizing on a never before seen mission of reconciling the two extremely contending faction of Islam and Communism (Socialism).

On July 4, 1927, Sukarno founded the Indonesian Nationalist Party (PNI) with his friends from the Nationalist Study Club of Bandung. The party advocated independence for Indonesia. Sukarno was chosen as the first leader of the party. With his excellent oratorical skills and his ability to reach out to the masses in a language of their own, Sukarno soon became a National Hero. His party was projecting the Dutch Colonial rule as a symbol of imperialism and capitalism and was in the task of unifying all the various nationalist groups under one umbrella. The ambitious work of unification was made easy due to the earlier disintegration of Sarekat Islam (a religion-based political party of Indonesia) and the banning of its offshoot, Indonesian Communist Party after their failed rebellion in 1926.

As PNI began to attract a large number of followers, particularly among the University educated youths, its activities came under the scanner of the Dutch ruling dispensation. Sukarno’s public meetings and speeches were often interrupted and disrupted by the colonial secret police. Sukarno’s anti-colonial approach and his various utterances against the authorities led to his arrest on December 29, 1929. Several other leaders were also apprehended. In the ensuing trial, Sukarno delivered a series of long political speeches in his defense, attacking colonialism and imperialism. These speeches were later collected, and the collection was titled ‘Indonesia Accuses.’ These speeches gained immense popularity among his followers and reached cult status over time.

The Government of Dutch-Indies accused Sukarno of treason and sentenced him to a four-year prison term. He was sent to Sukamiskin prison in Bandung to serve a sentence. Already a National Hero among the Indonesians, the pressure for his early release was mounting on the authorities and on December 31, 1931, he was released from the prison. However, he was again arrested after a short while and was sent to internal exile without trial. In February 1934, he was exiled to the remote town of Ende on the island of Flores. He was shifted to Bencoolen in Sumatra after four years.

In March 1942, Japan invaded the Indonesian Archipelago. Sukarno was released immediately after the invasion. The Japanese were quite conversant with the anti-colonial viewpoint of Sukarno. They made him a leader in their different organizations and also made him the Chief of the preparatory committee for Indonesian Independence. Though Sukarno had to work for the Japanese as their chief adviser and propagandist and was also in charge of recruiting labourers, soldiers and prostitutes on their behalf, his primary focus was on Indonesian Independence.

Japanese allowed the formation of a quasi-legislature comprising 67 representatives of the most ethnic groups of Indonesia and Sukarno was selected to head the establishment (BPUPKI - Badan Penjelidik Oesaha-oesaha Persiapan Kemerdekaan Indonesia). The primary task of the organization was to discuss and prepare the basis of a future Indonesian State. On this occasion, Sukarno introduced his five main principles: Democracy, Social Justice, Nationalism, Internationalism and Belief in God and coined the term ‘Pantjasila’ for it.

On August 17, 1945, Sukarno declared Indonesia as a sovereign Independent State and became the first President of the new Republic of Indonesia, a position he held for the next 21 years. Dutch Colonial rulers subsequently made two abortive attempts to regain control of Indonesia. Finally, on December 27, 1949, they formally transferred sovereignty to Indonesian people.

Sukarno married Siti Oetari in 1920 at the young age of 20. He divorced her in 1923. In the same year, he got married to Inggit Garnish. He divorced Inggit in 1943 after spending almost 20 years together. They were childless. He again married 15-year-old Fatmawati in 1943. The couple gave birth to five children. His eldest son Guntur Sukarnaputra was one among them. Sukarno was a firm believer of polygamy and the Muslim rituals of entitlement of up to 4 wives. He married several other women in the following decades.

Major General Suharto, an Army Commander, revolted against the rule of Sukarno during his long and controversial Presidential tenure. Eventually, Sukarno was divested from his president-for-life title and put under house arrest. His health deteriorated under detention due to the absence of proper medical care. He died due to kidney failure in Jakarta Army Hospital on 21st June 1970. He was interred in Blitar, East Java, Indonesia.