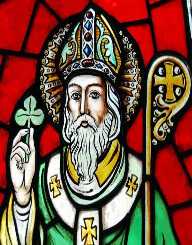 Saint Patrick was born circa 385 A.D. He earns lots of credit for advocating for Christianity in Ireland as a missionary during the 5th century. Also known as the "Apostle of Ireland", Saint Patrick reigns as the first patron saint of Ireland. Other saints include Columba and Brigit of Kildare.

Saint Patrick enjoys quite an amount of honor across different churches including the Anglican Church, Roman Catholic church, and the Eastern Orthodox Church. It is not clear when Patrick actively worked as a missionary, but scholarly sources suggest the second half of the 5th century.

Patrick also receives recognition as the first bishop of Armagh and Primate of Ireland. He successfully managed to convert a society from practicing Celtic polytheism. He has been ever since so regarded as the founder of Christianity.

Saint Patrick was born circa 385 A.D. in Britain. Little is known to historians and scholars about his life. Some indicate his birth name as Maewyn Succat and the name Patrick adopted later as a result of his religious ordainment. During St. Patrick's time, education and religion did not particularly enjoy much support.

Patrick's thirst for education and religion would later become an embarrassment to his father, Calphurnius, a deacon from a Roman family. His mother, Conchessa, on the other hand, had family relations with St. Martin of Tours.

At the age of 16, Irish pirates captured Patrick. They sold him into slavery in Dalriada where he took care of sheep. His master, Milchu, a high priest of Druidism led the pagan sect that had significant influence over the country then.

Patrick's capture did not bother him. To him, he took it as Gods' test of his faith. Therefore, his devotion to Christianity grew stronger during this time. Also, in his six years of captivity, he did his best to convert the Irish to Christianity.

In 408 A.D. the thought of escaping from slavery stroke Patrick's' mind. He had a dream in which manifested to him that he would get home. Because of this dream and the determination to get home, he boarded some sailor's ship.

Twenty-eight days later and after covering 200 miles, Patrick eventually gets home and reunites with his family.

After reuniting with his family, Patrick set to study and thereafter became part of the priesthood with the guidance of St. Germain. In 418 A.D Patrick was ordained as a deacon by the Bishop of Auxerre. Upon his ordination, he went back to Ireland and began spreading Christianity. He preached, wrote and performed a series of baptisms during his quest.

Although his work had to suffer some amount of resistance, he successfully managed to spread Christianity within and without Ireland. Other missionaries joined in the quest, and together their teachings went far and wide.

Throughout Patrick's missionary work, he gets acknowledgment for providing support to church officials, started monasteries, created councils and organized Ireland into dioceses.

St. Patrick died circa 461 A.D. in Saul, Ireland. His burial took place in the town of Downpatrick, County Down. However, there is no concrete proof of this information. Patrick enjoys honor in the Orthodox church. Also, today, there exists Orthodox icons dedicated to him.