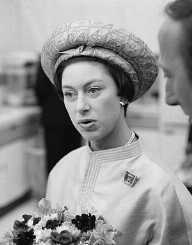 Princess Margaret, the only sibling of Queen Elizabeth II, was born at Glamis Castle, Scotland on the 21 August 1930.  She was baptized, Margaret Rose by the Archbishop of Canterbury, Cosmo Lang, in the chapel at Buckingham Palace on the 30 October 1930. At the time of her birth, her parents were the Duke and Duchess of York. Her early years were spent with her parents and sister at their townhouse in London and the Royal Lodge in Windsor. She made her first public appearance in 1934 at a family wedding when her uncle, Prince George, married Princess Mariana of Greece and Denmark. Within the family circle, Margaret Rose was known as Margot. Her childhood changed course when her uncle, King Edward VIII, abdicated and her father became King George VI on the 11 December 1936. This change meant that her sister Elizabeth was heir to the throne and Margaret was second in line. Her father was crowned King George and her mother Queen Elizabeth, at Westminster Abbey on the 12 May 1937.

Later that year, Princess Margaret became a Brownie, as part of the 1st Buckingham Palace Brownie Pack. In 1939, Margaret and her sister were left behind in Britain when their parents made a tour of Canada and the United States. After World War II broke out in September 1939, the royal family remained in London and spent the war years living in Windsor Castle. On Victory Day, the 8th May 1945, Princess Margaret and her sister left the palace and joined in the victory celebrations without their real identities being revealed.

In April 1947, Princess Margaret and her sister accompanied the King and Queen on an official visit to South Africa. The King’s equerry, Captain Peter Townsend was also on the tour. Later that year, Princess Margaret was a bridesmaid when her sister Princess Elizabeth married Lieutenant Philip Mountbatten at Westminster Abbey. When the King fell ill with lung cancer in September 1951, Princess Margaret was made a Counsellor of State. Her father died on the 6 February 1952 and Princess Margaret and her mother, now the Queen Mother, moved into Clarence House. The Comptroller of the household was Captain Peter Townsend. The couple fell in love, and when he proposed, Margaret accepted, but because he was divorced, under the Royal Marriages Act 1772, as she was under 25, she needed the Queen’s permission to marry.

After the Queen consulted with the Prime Minister, Winston Churchill, it was decided that permission for the couple to marry would be refused. Once Princess Margaret reached the age of 25, she was told that if she did marry Townsend, she would have to renounce all her royal rights and entitlements. In 1955, Princess Margaret formally announced that her relationship with Townsend was over. On the 26 February 1960, her engagement to Antony Armstrong-Jones was announced, and they married in Westminister Abbey on the 6 May 1960. The couple lived in Kensington Palace and had two children: David Armstrong-Jones (b.1962) and Sarah Armstrong-Jones (b.1964). During the 1960s, Princess Margaret’s name was linked with various men including Robin Douglas-Homes and Roderic Llewellyn. In 1976, her separation from Antony Armstrong-Jones was announced, and they divorced on the 1 October 1978. She continued with her royal duties including touring Australia, China, Swaziland and the Philippines.

In 1987, Princess Margaret had an operation which removed part of her left lung. Then in the early 1990s, she was hospitalized with pneumonia. She suffered a mild stroke in 1999, and again in 2001, she suffered another stroke which left her partially paralyzed. Princess Margaret died of a stroke on the 9 February 2002 in King Edward VI hospital in London.