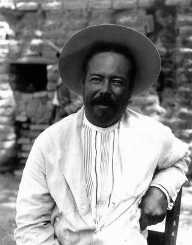 Pancho Villa was a complicated figure in Mexico’s history. He is a folk hero to many in Mexico, where he was Robin Hood-style bandit and a revolutionary leader in the Mexican Revolution. He was called into action once again to assist in a coup against a new dictator. Villa stayed active afterwards, while the Mexican government endured unrest. It is important to note that much of what we know about Villa comes from his narratives. In the end, he reverted to banditry and was assassinated.

There is more than one version of Pancho Villa's early life. This comes from the contradictory stories that Villa himself told to reporters and filmmakers. What we do know is that he was born in 1878. He had humble beginnings; his father, Agustin Arango, was a sharecropper who died early in Villa’s life. His mother, Micaela Arámbula, took care of the family. Villa was raised on a large hacienda in the state of Durango. The name of the villa was Rancho de la Coyotada. There is some question as to whether Arango was his biological father.

Pancho Villa was fond of claiming he was the son of Agustin Villa, a well-known bandit. This would explain why he changed his name from José Doroteo Arango Arámbula to Pancho Villa later in life. Villa moved to Chihuahua at the age of 16, and then his world changed. He returned to his childhood home and killed Agustín López Negrete, a hacienda owner. Villa claimed the man had raped his sister, but the story never was confirmed. To escape prosecution, Villa took a horse and headed to the hills. There, he began his life as a bandit, but the details are not definitive.

The simplified version of the start to the Mexican Revolution is this: during the 1910 elections, things went very wrong. The incumbent president, Porfirio Díaz, did not appreciate being challenged. The newcomer was Francisco Madero. Díaz had Madero arrested, put on a sham election, and proclaimed himself the winner. There was a problem, however. Madero had popular backing. Villa was recruited by the head of the anti-re-electionists in Chihuahua, by the name of Abraham Gonzalez. It was Villa’s job to clear out the anarcho-syndicalists who stood in Madero’s way for not being radical enough. When he was successful, Villa found promotion after promotion, until he won the first Battle of Ciudad Juárez along with Pascual in 1911.

Madero was a disappointment to Pancho Villa and many others. Rather than establishing a new power structure, Madero kept his predecessor’s in place. He also turned over hacienda land, seized in battle, to Villa, Orozco, and other high-level rebel fighters. Instead, he gave the land back to the original landowners to appease them. These actions turned Orozco against Madero. Orozco asked Villa to join him against Madero, whom he saw as a weak leader. Villa refused and fought successfully for Madero instead. His loyalty was repaid with treachery by his superior, a man named Huerta. While Villa sat in prison in 1913, Huerta assassinated Madero, started a coup, and became president.

Huerta had a challenger by the name of Zapata. Pancho Villa won even more fame for the battles he won against Huerta from 1913 to 1914. He was so successful that the United States Army made a deal with him and Hollywood. They would film Villa’s military in action, and Villa would get a cut of the profits from the shows produced. By this time, Villa was also governor of Chihuahua. Lastly, Villa put his banditry skills to use. He held bankers’ families as hostages for ransom. Villa put the income he gathered from these and other sources to good use. His troops were brought up to date and enlarged.

Soon, Pancho Villa became powerful – too powerful for some. A man by the name of Carranza, who was also rising in power, dealt Villa a crushing blow. Carranza’s order cost Villa an enormous sum of money and an even more massive military victory. As a result, Villa resigned. That was not the end of Villa’s troubles. Once Huerta was gone, there was a power vacuum. Zapata and Carranza fought each other for dominance. Villa supported Zapata, but Villa suffered defeat after defeat. Eventually, he was left with just a couple hundred loyal men and not much in the way of supplies. When the United States threw its support behind Carranza, Villa once again retreated to the hills.

Fighting with the United States

The United States had given Pancho Villa money, support, and had sold him weapons for years. When the U.S. decided to back Carranza, in the hopes of bringing stability, they dropped all support. This did not sit well with Villa. Things went from bad to worse in 1915 and 1916 when the U.S. took a more active role in combating his guerilla efforts against Carranza. In response, Villa attacked Columbus, New Mexico in March 1916. There are differing views regarding his reasons for doing this. Some say it was retaliation, while others say he needed supplies. Three more significant attacks were carried out on American soil after that. Wilson sent U.S. troops to pursue Villa for a time. Villa lost several key men, but he escaped.

In 1920, Carranza was assassinated. This made life easier for Pancho Villa, who retired to a hacienda life. He negotiated with the new administration for the land and a pension for himself and the few men who remained loyal to him. These men served as his bodyguards. Unfortunately, on July 20, 1923, Villa was assassinated while on an errand. What happened after he died is the stuff of folktales. He was buried the day following his assassination. Rather than bury him where he had wanted, he was interred where he died. In 1926, it was said his skull was stolen and sold to an idiosyncratic millionaire. This man was rumored to collect famous heads. In 1976, Villa was reinterred within the Monument to the Revolution in Mexico City.