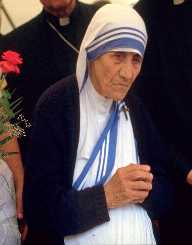 Blessed Teresa of Calcutta, the sister of the missionaries of charity with her white and blue-bordered sari. She was known to the world as Mother Teresa and served as a symbol of love, care, and compassion to the world. Born as an Albanian born Indian Citizen, she chose to abide by the Roman Catholicism and chose to help the people around the world.

Mother Teresa was the youngest of her parent and was born on the 26th of August 1910. She was born to Nicole and Dranafile Bojaxhiu in Skopje. She was however baptized as Agnes Gonxhe Bojaxhiu (she called this date her true birthday). At age five and a half, she got her first communion. She was raised in a Catholic family is the fact that her parents were ardent followers of the Catholic faith. Her mother was so spiritual and filled with religious things. Her mother was known as an active participant in the local church activities. Her father died at age eight, but her mother did not compromise with her up-bring despite the financial hardship faced. The children were raised with love, care, and affection. Young Agnes seemed to gain a lot as regards to belief and religious heart from her mother.

At age 18, Mother Teresa left home after she found her true calling as a nun. She got herself enrolled at the Institute of the Blessed Mary Virgin (Sisters of Loreto) in England. There, she was named Sister Mary Teresa. After a year of training, she traveled down to India to teach at St Teresa’s School. She learned the local language and took the first religious vows in May 1931. Upon the completion of this vow, she got assigned to duty at Loreto ENtally Community of Calcutta.

She also taught at Mary’s School. Six years later, she took her final profession vow and acquired her world recognized name, Mother Teresa. She taught till she graduated till the post of Principal at St Mary’s School in 1944. She showed a lot of love, kindness, compassion and an unflinching commitment to service. She was so much disturbed by the poverty that was prevalent in Calcutta.

She got approval from a local archbishop to pursue her new calling after two years. She traveled to Patna, Bihar to gain medical training at the Medical Mission Sister. She made her first outing in 1948 to help the poor. As from then, she reached out to the poor and needy every day and showed them love and compassion. Sooner, she was joined by some voluntary helpers.

Mother Teresa later started an open school and a home for the destitute. Later in 1950, she got her approval to start a congregation, the Missionaries of Charity, and this was started with 13 members. As financial support keeps coming in, she started raising the bar for her charity Scope. She initiated some projects just to help the poor and the destitute. It should be noted that most of her policies were meant to cater for the poor, orphans and destitute as well as homeless.

Her congregations' first house was opened in Venezuela in 1965 with five sisters and has since then spread to countries in Africa, Asia, Europe among others. Mother Teresa was known to have rescued some children who were trapped in a front line hospital in Beirut. The communist countries rejected the Missionaries of Charity but later accepted it in the 1980s. She returned to her hometown in 1991 and opened Missionaries of Charity Brothers. As at 1997, Missionaries Charity had about four thousand sisters in 610 foundations. It also has 450 centers in 123 countries across the six continents.

Her health was on a fast decline as at the 1980s. It was in that year that Mother Teresa suffered her first heart attack on her visit to Pope John Paul II in Rome. For the next decade, she fought cardiac problems. Her declining health later made her step down as the head of the order on March 13, 1997. She gave up the ghost on the 5th of September, 1997. People all over the world mourned her. Structures and roads were named after her, and she was memorialized. On the 4th day of September 2016, Pope Francis canonized her. She thus becomes Saint Teresa of Calcutta.