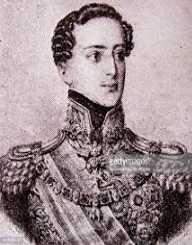 Miguel I was the third son of King Joao VI of Portugal. He proclaimed himself king of Portugal depriving his niece the claim to the throne.

Miguel I was born in Lisbon on October 26, 1802. He was given the royal title Duke of Beja. He was the second son of King Joao VI and Queen Carlota Joaquina. His elder brother Pedro was fond of his father, as Miguel was the favorite son of the queen.

In 1807, France invaded Portugal. Miguel left with the royal household to Brazil. He returned in 1821 after the Emperor Napoleon of France was defeated by the Portuguese army. Prince Pedro stayed back in Brazil as the Portuguese royal regent. King Joao VI established a new constitution. Portugal became a more liberal kingdom with a monarch as its head of state.

Miguel I was a naughty child. He picked on his subjects on the streets of Lisbon. He had a group of band brothers who abetted in his immoral behavior. Owing to his royal status, the ordinary citizens could nothing about his wayward ways.

In 1823, the French army invaded the Spanish kingdom. France deposed the Spanish government and installed its proxy administration. Buoyed by the events in Spain, Miguel I led a mutiny against his father for having liberal views. King Joao VI agreed to change the laws and accommodate the absolutist views of his son. Instead, the king appointed a more liberal cabinet. Angered by his father, Miguel led another mutiny against the throne in April 1824. Miguel was defeated by the Portuguese army. In June 1824, King Joao VI sent him into exile in Vienna, Austria.

On March 10, 1826, King Joao VI of Portugal died in Lisbon. Prince Pedro who was in Brazil ascended to the throne as King Pedro IV of Portugal and Emperor of Brazil. After only two months, he abdicated the Portuguese throne in favor of his daughter Maria II.

Princess Isabel Maria, King Pedro’s sister, became the regent ruler of Portugal until Maria II became of age. In an attempt to secure the peaceful coexistence within the royal family, Pedro offered a deal to Miguel I. In the proposal, Miguel would be the regent when he attained the age of 25. He would then marry Queen Maria II later when she grows to maturity.

Miguel accepted the conditions of the proposal and swore to uphold the binding agreement. When civil unrest engulfed Portugal under the regency of Princess Isabel Maria, Pedro decided to bestow custody of the kingdom to Miguel. Miguel hastily accepted the offer. He returned from his exile on February 22, 1828.

Miguel I ruled as regent under the name of Queen Maria II. Gradually, he became influenced by his mother, Queen Carlota. He systematically dismantled the existing government institutions in Lisbon. He replaced them with his system of loyalist administration.

On July 7, 1828, Miguel proclaimed himself the absolute monarch of Portugal. He became King Miguel 1. He was immediately recognized by some powers conservative powers like The Vatican, Russia, Spain and the US.

The military generals in Porto and other cities staged a revolt against the new king. King Miguel 1 gathered his followers and other loyalist army generals to fight off the rebellion. He successfully pacified the revolt. Scores of army personnel were executed under hastily arranged military courts.

King Miguel 1 persecuted the French and English nationals in Portugal. France and England refused to recognize him as the new Portuguese king. In response, the French government went into war with Portugal. The two countries fought many battles later called the liberal wars.

In 1831, Emperor Pedro of Brazil abdicated his Brazilian throne and headed to Portugal. He rallied the liberals against King Miguel 1. Pedro managed to win over major cities starting with Porto. Other liberal European powers joined in the war to depose King Miguel 1. On May 26, 1834, King Miguel 1 surrendered and renounced the kingship.

He fled to Genoa. On arrival, he rescinded his earlier renunciation of the throne. After failing to garner support for a return to Portugal, he traveled to Italy. He then settled in Germany for the remainder of his life.

King Miguel 1 married Adelaide, a princess of the German royal family on September 24, 1851. They had six daughters and a son.

King Miguel 1 died on November 14, 1866, aged 64. He was buried in Bavaria. His remains were excavated and buried in the royal cemetery in Lisbon in 1967.

Through the marriages of his children to European royals, Miguel and his wife became ancestors to most of the present day European monarchs.