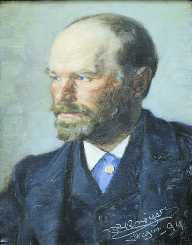 Michael Ancher was a Danish painter and is famous for his paintings of fishermen and other activities in the life of the fishermen community in Skagen. He had learnt rigid formation and composition methods through formal education in painting. He came in contact with new techniques and philosophy sweeping over Denmark in Skagen. He was able to combine the rigid components of the conventional school with realism. He is remembered not just as a painter of the Skagen group but of Denmark as a whole.

Michael Ancher was born on 9 June at Rutsker on the island of Bornholm, Denmark. His star sign was Gemini. His father was a local merchant. The limited finances prevented Michael from completing his secondary education in Ronne. He worked as an apprentice clerk from 1865 at Kalo Manor in eastern Jutland.

In 1866 Michael Ancher met painters Theodor Philipsen and Vilhelm Groth, who had come to that place to paint. They were impressed with his talent and encouraged him to take up painting as a profession. In 1871 he joined the Nielsen’s art school and later the Royal Danish Academy of Art in Copenhagen. His teachers Wilhelm Marstrand and Frederik Vermehren encouraged his interest in genre painting.

Michael Ancher left the institute in 1875 without graduating. Karl Madsen, a fellow student, invited him to travel to Skagen. Skagen is a small fishing village in the far north of Jutland where the Baltic and the North Sea converge. Madsen and Archer became members of a group of painters called Skagen Painters. They met at Skagen every summer. The painters met in the Brondhums Hotel in Skagen and exchanged ideas. In 1880 Ancher married fellow painter Anne Brondhums, whose father owned the hotel.

Michael Ancher was one of the many artists who decided to settle in Skagen. He started his career in Skagen.  He initially had to adjust to the style of Skagen painters. His traditional training influenced him.  After his marriage to Anna, he was introduced to the natural appeal of reality and its colors. He combined the pictorial compositional with naturalism. He created modern monumental figurative art like ‘Baptism’.

Michael Ancher's work in 1879 Vil Klare Pynten (Will He Round The Point?)gave him his first breakthrough. His later works were The Lifeboat Carried Through The Dunes (1883), The Crew is Saved (1894) and The Drowned Man (1896). His works depict scenes from the lives of Skagen fishermen and their dramatic and heroic experiences.

Michael Ancher received the Eckersberg Medal in 1889 and the Order of the Dannebrog in 1894. His paintings along with his wife Anna’s can be seen in Skagens Museum, Statens Museum for Kunst, the Frederiksborg Collection and Ribe Art Museum.

Michael Ancher married Anna Brondhums in 1880. They had a home and studio in the ‘Garden House’ which is now in Skagen’s Museum garden. In 1883 they had a daughter Helga. In 1884 they moved to Markvej. In 1913 a large studio was added. In 1964 Helga passed away and left the house and all its contents to the Helga AncherFoundation.

Michael Ancher died on 19 Sep 1927 in Skagen. In 1967 the home was turned into a museum. Original furniture and paintings created by the Anchers and other Skagen painters are displayed in the restored home and studio. Temporary art exhibitions are arranged in Saxilds Gaard another building in the property.

Anna and Michael Ancher were featured on the Danish Thousand Kroner bill, the largest denomination in circulation in Denmark. It has a double portrait of Anne and Michael Ancher derived from two paintings by Peter Severinkrayer. The paintings originally hung on the walls of the Brondhums hotel.