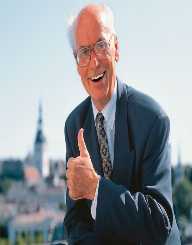 Lennart Meri was a renowned politician who became the second president of Estonia in between 1992 and 2001. Earlier, Lennart Meri had served as the minister for foreign affairs and as an Ambassador, representing his country in Finland. In addition to Meri's excellent political career, he also enjoyed great success as a writer and film director. Lennart Meri began his writing career early, publishing his first book when he was only twenty-nine. Lennart Meri then ventured into politics during the 1980’s, first serving as an appointed minister. During Meri's reign as president, he is mostly remembered for his efforts and determination to rehabilitate refugees around the world.

Lennart Georg Meri was born on 29th March 1929, in Tallinn. His father was Georg Meri and mother Alice Brigitta Engmann. Georg served as a Diplomat and later became a Shakespeare translator. At an early age, Lennart’s family moved left Estonia and traveled abroad. While there, Lennart attended nine different schools and was able to familiarize with about four different languages. Due to this Lennart could speak five other languages fluently apart from his Estonian mother language. They were German, Russian, English, French and Finnish. In June 1940, Estonia was occupied by the Soviet Union’s armed forces. At the time, Lennart Meri's family was in Tallin Estonia. This caused a lot of disunity and differences among the extended family since some supported while others were against the Soviet Union. The next year, Lennarts family among many other Latvians, Estonians, and Lithuanians were deported to Siberia.

The family heads were separated from their families and forced to live in concentration camps where many lost their lives. While there, Lennart Meri began working as a Lumberman, potato peeler and a rafter at only 12, in a bid to help support his own. During the exile Lennart Meri developed great interest and passion in the Estonian Uralic languages and the cultural and ethnic kingship of the Uralic people. This was the foundation for a long-lasting theme of his work. Lennart's family survived the exile atrocities and moved back to Estonia. Lennart  then joined The University of Tartu where he graduated Cum laude in 1953.

Lennart Meri authored his first book in 1958, after a tour to the Tian Shan Mountains and the Kara Kum Desert. This book received a positive response from readers all over. After that in 1963 Lennart Meri became part of the Estonian Writers Union. The following year, he authored the book `Tulemagede Maale, which means `to the land of fiery mountains.’ The book was a description of his tour to the Kamchatka peninsula in a vivid yet non-fictional way. Meri then wrote another book named `Virmaliste Varaval,’ which means `At the gate of the northern lights.’ Similar to the previous one, it detailed his voyage to the Northeast Passage. More so, it contained observations by his fellow travelers, i.e., cook, wrangle and Bering. The book was later translated to Finnish.

In 1976, Meri published yet another book entitled, `Hobevelage’ which means `silver white.’ The book relates to the history of his native homeland and the neighboring areas. Later during the 1970’s Lennart traveled to Finland after permission from the Soviet Union. There, Lennart Meri advocated for freedom for Estonia. More so, he was loud spoken about the government act of using Virumaa region as a site for phosphorus mining.

In 1988, Lennart Meri founded the `Estonian Institute.’ The purpose of the institute was to help the students within the country to be able to pursue further studies in foreign countries. During the same year, Lennart pursued his political ambitions further. He became part of the founders of `Estonian popular front,’ an organization whose objective was to gain freedom from the grasp of the Soviet Union. More so, he played a significant role in `Singing revolution’ which is sometimes referred to as the `Estonian independence movement.’

In 1990, Estonia conducted non-communist elections, where he was appointed as `minister for foreign affairs.’ In his reign as a minister, Lennart chose highly skilled and educated young personnel, to create a recognizable body in the global scene. Lennart Meri attended conferences in major cities regularly to market his nation to the globe. More so, he often organized discussions with the foreign ministers of other countries, all to the same cause. In 1992, Lennart was appointed as the Estonian Ambassador. In collaboration with other international ministers from Baltic countries, Meri formed `council of the Baltic Sea states.’ During the same year, he was the presidential candidate for `Pro Patria Union’ and won the election, becoming Estonia’s second president. On 20th September 1996, he was re-elected for a second term and served for the whole five-year term.

Apart from politics and his writing work, Lennart Meri also came up with various films, which focused on his country during the Soviet Union reign. An example is `Linnutee tuuled.’

Lennart Meri was declared the `merited writer of Estonian SSR’ in 1976. He earned an honorary doctorate from the University of Helsinki in 1986. Due to his human rights promotion acts and his contribution to European integration, he has been awarded `liberal international prize and `coudenhove-kalergi’ ward respectively.

Lennart was declared `European of the year’ in 1998 by a French newspaper named `La Vie.’ Many countries governments including Germany and Poland have granted him orders of merit.

Lennart Meri got married to a lady named Regina Meri and the couple had two children together, namely Mart and Kristjan. Mart is currently a politician. He later had another daughter with his girlfriend Helle, named Tuule. He later married Helle in 1992.

Apart from his political and writing work, he frequently partnered with human rights organizations to help in refugee rehabilitation.

Lennart Meri died on 14th March 2006 as a result of a malignant brain tumor.