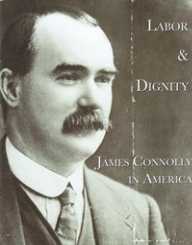 Wanting only the Earth: James Connolly

James Connolly was born on June 5, 1868. His parents John Connolly and Mary Connolly shifted to Scotland from Monaghan, Ireland to a place called Cowgate in the district of Edinburgh. Cowgate in Scotland was densely populated with Irish immigrants and was nicknamed ‘Little Ireland.’ James Connolly was born in this Irish ghetto, where thousands of Irish immigrants had settled down. Both his father and grandfather were manual labourers. James could not afford to have a proper education. He went to the local Catholic primary school up to the age of 10.

After that, James Connolly had to search for some job to support him and started working as a labourer in Edinburgh. His eldest brother John joined the British Army due to the intense financial problems they were facing. Following his brother's footsteps, James too joined the British Army. He had faked his age and name to join the Army, as he was only 14 when he joined the outfit. He went to Ireland with the second battalion of the Royal Scots Regiment. He spent almost the next seven years in the rural areas of Ireland fighting for the British Army, a war historically known as the ‘Land War.’

During these seven years, James Connolly got thoroughly acquainted with the local issues of the Irish People as well as developed a keen dislike and hatred for the British Army. In 1889, when his regiment was due to travel to India, he abandoned it.

James Connolly returned to Edinburgh after deserting the army. He was desperately in need of a job. He had just got married and desperately needed a sustainable livelihood. He had already involved himself in the Scottish Socialist Federation of Edinburgh. However, he had to open a cobbler’s shop to support his family. He started the shop in 1895, but his shoe-mending skills were not enough to run the shop successfully. His priorities were also not with his livelihood. He was very active in the Socialist movement of that time, and his political activism took precedence over the not-so-productive shoe-mending business.

James became the secretary of the Scottish Socialist Federation replacing his brother John. John, at that time, was leading an agitation for eight hours work a day and demanded the same in a rally organized by the federation. Edinburgh Corporation, the then employer of John Connolly, sacked him on this ground. As such, John was forced to concentrate on finding a new job. Consequently, James came forward to continue his brother’s unfinished work as the Secretary of the Scottish Socialist Federation. He also associated himself with the Independent Labour Party formed by Keir Hardie in 1893.

Dublin Socialist Club of Ireland was looking for a full-time secretary during late 1895. James Connolly decided to move to Dublin, his native country, along with his family after taking up the job on offer. Under the secretaryship of James, Dublin Socialist Club soon emerged as the hub for Irish Socialist and Republican movement. The club was renamed as Irish Socialist Republican Party (ISRP). ISRP was a vital and decisive organization which helped in shaping the early history of the Irish socialist and democratic movement. James was gaining momentum throughout Great Britain as a socialist activist. He was the founding editor of ‘The Socialist’ newspaper and was one of the co-founders of the Socialist Labour Party which formed in 1903, after breaking away from the Social Democratic Federation.

In September 1903, James Connolly immigrated to the United States after his socialist movement failed to achieve the necessary success to survive effectively. In 1906, he joined the Socialist Labour Party of America as a member. Soon, he became active with the key American Socialist Organizations like the Industrial Workers of the World and the Socialist Party of America. In 1907, he founded the Irish Socialist Federation in New York.

In 1910, James Connolly returned to Ireland. He started serving the Irish Transport and General Workers’ Union as Assistant of James Larkin. He unsuccessfully contested twice for becoming a corporator in the Dublin Corporation after his return from the USA. In 1912, he founded the Irish Labour Party along with James Larkin to act as the political wing of the Irish Trade Union Congress. He was a key member of its National Executive. In 1913,

James cofounded the Irish Citizen Army along with an ex-British officer Jack White. It was an armed and well-trained outfit formed mainly to protect the workers and the participating strikers from the regular assault and atrocities of the Dublin Metropolitan Police. Though their numerical strength was just around 250, they were committed to establishing a Sovereign, Independent and Socialist Irish State. In 1914, James became the head of the Irish Transport and General Workers’ Union. Following the leftist ideology, they decided to oppose the Allied Forces as in their opinion all the countries forming the Allied Force were capitalist economies.

In 1916, the Irish Citizen Army under the diminutive leadership of James Connolly declared an independent, socialist Irish Republic. On Easter Monday, April 24, 1916, around 1600 people under him staged an armed rebellion against the British Government in Ireland. The rebels seized essential buildings including the Dublin General Post Office of the City and fought pitched battle with the Government forces. Soon the rebels were defeated, and they either surrendered or were captured. Many of them perished in the process. James was seriously injured in the battle and surrendered to the authority.

James Connolly married Lillie Reynolds, a young Governess, in April 1890. They had several children. His son Roddy is a well-known politician, and daughter Nora is a prolific writer and a crusader for the Irish Republican Movement.

James Connolly was sentenced to death for his role in the Easter Rising. On May 12, 1916, he was executed by firing squad. His body along with other prominent leaders of the rising was put into a mass grave without a coffin. It was a tragic end of a real political force of Ireland in modern times.