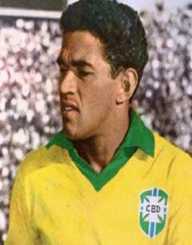 Garrincha, the name means “wren.” This is the name that was given to Manuel Francisco dos Santos when he was little. The boy was small for his age due to a congenital disability that gave him a deformed spine and left his left leg six centimeters shorter than his right. His friends called him “mane,” which is short for Manuel. So he was also known as Mane Garrincha.

On October 28, 1933, Manuel Francisco dos Santos was born in Rio de Janeiro, Brazil. He had an older sister named Rosa and a little brother named Jimmy.

By the age of 20, he was married to his first wife and had a child. Up until then, he had no interest in a professional career in soccer, also known in Brazil as football, despite his talent for the sport. His brother played twenty games in the year 1959.

The team officials of Botafogo were ecstatic that he was over 18 when he signed with them in 1953. This was because he was able to be treated as a professional. In 1957 he helped Botafogo win the Campeonato by scoring 20 goals between 26 games that year.

After the 1958 World Cup, he gained weight partly due to his drinking. On one occasion he ran over his father while drunk and out of it. He had no idea what he had done.

Garrincha played for Botafogo for 12 years before being sold to Corinthians because his career was declining. After a short time with the Columbian team Atletico Junior he went back to Brazil to join Flamengo. He was with this team until 1969. His professional career lasted until 1972, having a 19-year career.

He decided to end his professional career in 1973. His reasons were because of his age and the fact that he became a grandfather for the first time. Garrincha played his farewell match on December 19, 1973, against a FIFA world team at Maracanã Stadium. One hundred thirty-one thousand people saw this match.

Garrincha drank heavily over his life just as his father had done before him. He had several car accidents throughout his life, one of which killed his mother in law.

Garrincha was married twice and had many affairs and mistresses in his life. He was known to have fathered 14 children, 8 of which was with his first wife, Nair Marques. They had been married in 1952 and divorced in 1965. He married his second wife Elza Soares in 1966. But they divorced in 1977 when she had left him for hitting her one night.

On January 20, 1983, Garrincha died of cirrhosis of the liver due to his heavy drinking over the years. By the time of his death, he was mentally and physically a week because he had been hospitalized 18 times during the year of his death at the age of 49.