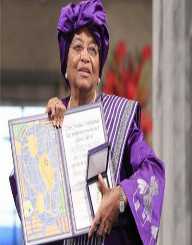 Ellen Johnson Sirleaf envelops her ten years of the presidency with top twenty contenders vying for the seat. She will not only be remembered as the first elected female to govern the state, but also the only woman who embraced progression. She has spent the rest of her life competing with high commands that race the African politics. Ellen has been forced into exile and imprisoned for unobvious reasons. That is why she is defined as the ideal woman who represents history at its best. In that case, a pseudonym name ‘The Iron Lady’ perfectly rhymes with her personality. She shocked the world and beyond in 2005 when she surpassed one of the football legends, George Weah. Not to mention she is the holder of 2011 Nobel Peace Prize.

On October 29, 1938, Ellen Johnson Sirleaf was born in Liberia, Monrovia to Martha, a teacher, and Jahmale Johnson, a lawyer. From 1948 to 1955 Ellen studied economics and accounts at the College of West Africa. In 1961 she moved to the United States where she continued her education and received a degree at University of Colorado. She stayed in the United States till she got her Bachelors in accounting at Madison Business College. She went along and earned a Master of Public Administration from Harvard University.

After completing her studies, Ellen went back to her motherland Liberia where she got an Assistant Minister of Finance position. She worked under William Tolbert doctrine in 1972, but she came to resign after one year. She went to Nairobi, Kenya in 1981 where she served as the Vice President of the African Regional Office for four years. She came to resign from her Citibank position when she got involved with general elections in Liberia in 1985.Here she worked at the Equator Bank, HSBC branch.

In 1992 Johnson chaired the Assistant Administration seat as well as the Assistant Secretary General position. After five years she resigned and proceeded to vie for presidential seat general elections in Liberia. She was a member of the United Party with whom she competed with Charles Taylor. She contested for the presidential seat as the main leader of the Unity Party. The same year, she became the first woman to lead a colonized nation.

Early in 2006, Ellen Johnson presumed her Presidential duties as the first elected female head of state. She then vied for the presidency for the second time in which she won against Winston Tubman. She later took a presidential oath on January 16, 2012.

In 2006, Ellen received the African Prize for Leadership and the same year she earned ‘David Rockefeller Bridging Leadership Award.' She later received the Presidential Medal of Freedom award. From 2011 to 2012 Ellen garnered Nobel Prize for Peace, Friend of the Media Award, and Indira Gandhi Prize for Peace among others. I won’t forget to mention that she holds several honorary doctorates from high ranked universities including Brown University, Harvard and Yale University. Ellen Johnson Married James Sirleaf at the age of 17, and together they had four sons. They later divorced as she progressed with her career.