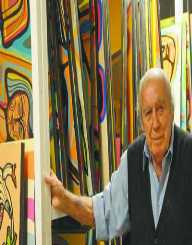 Carlos Paez Vilaro was born on November 1, 1923, in Montevideo, Uruguay. As a child, he lived a modest life, since his family was very poor. Vilaro began to show a talent for drawing at a very young age and soon became passionate about the craft. In 1939, Vilaro moved to Argentina. He became a printing apprentice in the Barracas section of the capital Buenos Aires. During this time he created his first paintings, showing his shock about the contrast between the ordinary factory life and the vigor of the Tango districts of the city.

In 1940s, Vilaro moved back to Uruguay and developed an interest in the Afro-Uruguayan culture. He settled in the primary black neighborhood of Mediomundo and studied the Candombe and Comparsa dances of the culture. During this time, he produced bright, and bold-colored works.

Back in Uruguay, Vilaro began to compose several musical pieces in the two traditional genres and conducted an orchestra. The group's congas and bongos were decorated with Vilaro’s thematic drawings. His interest in the African culture later led him to go to Brazil, which was home to the western hemisphere’s largest population of African descent. Vilaro’s popularity grew, and in 1956, he was invited by the director of Modern Art Museum of Paris to exhibit some of his work. Vilaro made his first visit to Afrika the same year, traveling to Dakar, Senegal.

In 1958, Vilaro became one of the founders of the Grupo de Los 8- an Uruguayan artist movement. He formed the group together with some other artists that wanted to promote the new tendencies in painting. The group was invited to join the international exhibition at the Buenos Aires Museum of Modern Art by the art critic Rafael Squirru, in 1960. The exhibition featured such artists as Willem De Kooning, Roger Hilton, and Lucio Fontana. The experimental style of Grupo de Los 8 gained an unquestionable place and relevance in Uruguayan art, as well as on an international level. Some of the group’s artwork was exhibited all over the world.

By 1959, Vilaro was already very well known artist. He was commissioned to create a mural for a tunnel connecting a new annex to the Organization of American State’s Washington, DC headquarters in the Pan American Union building. The mural Roots of Peace was initially planned to be 15 meters. It was finished in 1960 and measured 155 meters long and nearly 2 meters high. The mural was repainted by Vilaro himself, due to the humidity damage.

In 1958, Vilaro purchased a sea-front property in eastern Uruguay Punta Ballena. At the time the building was a small, wooden lodge, but with time was rebuilt and became the Casapueblo. The whitewashed cement compound was built in several stages and resembles the mud nests of the region’s native hornero birds. Casapueblo became Vilaro’s home, atelier, and museum. He continued to add to the structure, sometimes even creating a room for a particular guest. He later opened a part of the complex as a guest house and hotel.

Since his time spent in Europe, Vilaro remained close friends with Pablo Picasso and Brigitte Bardot. He remained active in European and African culture, and 1967 established a film production company Dahlia. He traveled to West Africa nations to make a documentary Batouk.

Vilaro was often commissioned to create murals and sculptures for governmental offices, corporate headquarters, and private homes. His work included 12 murals in Argentina, 16 in Brazil, 4 in Chad and Gabon, 11 in the United States and 30 murals in Uruguay. Besides the mentioned, his work is also seen in many other places in Africa and the Polynesian islands. Vilaro also designed a non-denominational chapel for a cemetery in San Isidro, Buenos Aires.

Vilaro’s first marriage was to Madelon Rodriguez Gomes. The couple had three children. His son Carlos Paez Rodriguez joined the Stella Maris College Rugby team. Many members of team tragically lost their lives in 1972, when the Uruguayan Air Force Flight 571 crashed in the Andes range between Chile and Mendoza Province in Argentina. From the 45 passengers on the board, 16 survived, including his son.

In 1976, Vilaro met an Argentinian tourist Annette Deussen. In 1984, she had a child with him, while still married to another man. Her marriage dissolved in 1986 and she married Vilaro in 1989. However, her previous husband continued to fight to be the child’s guardian, until Vilaro’s paternity was proven and the case resolved in his favor in 1999. Vilaro died in 2014, at the age of 90 in his home Casapueblo. His son later stated that he had never known a person who worked that much, and told the press that his father worked until the last day of his life.