Thoth is the seventh sign in the Egyptian zodiac. Thoth is the moon god of learning and wisdom. He is shown with a moon on his head. He is known as the creator of writing. In mythology he was the record keeper of everything.

He was sought out for his knowledge and wisdom. He was also was in charge of judging the dead and weighing their soul to see what kind of afterlife they would have. 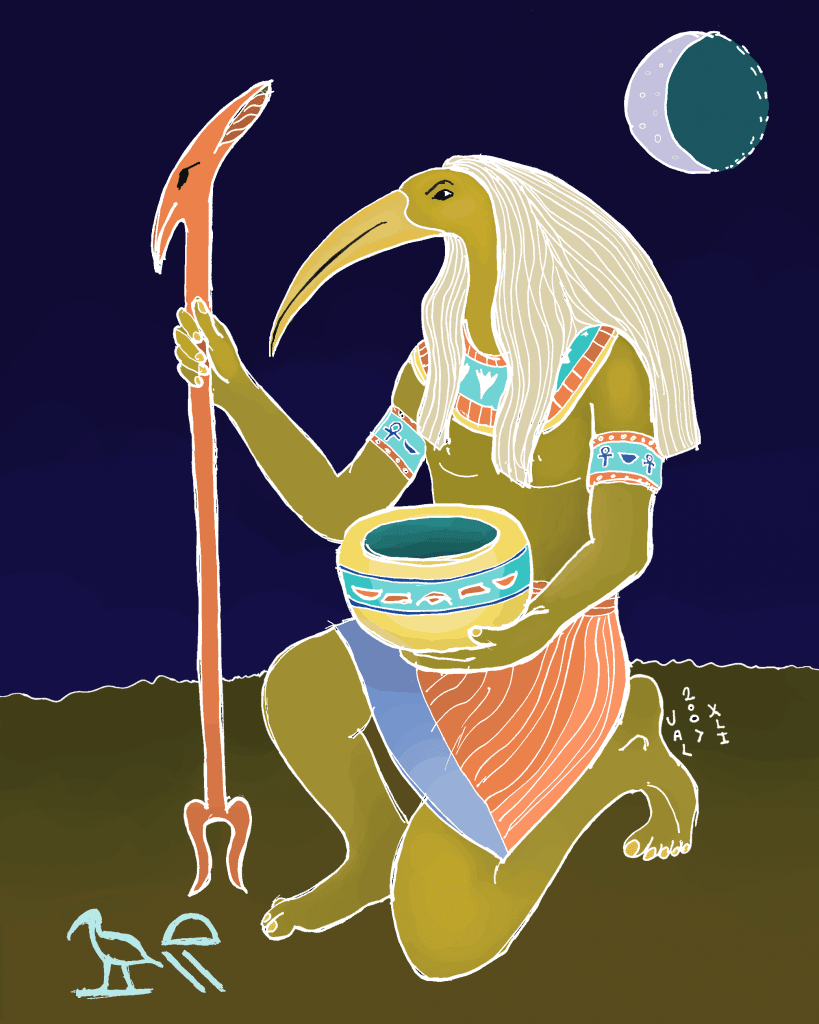 People born under this Egyptian astrology sign of Thoth are good problems solvers. They are very creative and love sharing everything they have learned with others. They are naturally drawn to careers as teachers and mentors. People are drawn to them because of all the knowledge and wisdom they share.

They are good organizers and can be perfectionists. Since they have the energy of Thoth who was the ancient scribe, they can be good communicators and may pursue a career as a writer or journalist. They are very trusting of others and are humble and willing to give help wherever they may be needed.

The Thoth people have good memories and will never forget a favor or a kind gesture from someone. They are always looking to improve themselves and become a better person. They will not settle for being average.

They are honest and in romantic relationships they will likely remain faithful. They are attracted to partners who have the same values as they do. They need a partner who is stable and let’s them take the lead. They love to be surrounded by their family and friends and want someone who also values family.

The Egyptian God sign Thoth love to seek out knowledge and aside from pursuing a teaching career they may be life-long students. They are patient so they won’t mind having to go through years of school if it means gaining the knowledge they seek.

They are very inventive. They have many new and creative ideas that would help others. This creative energy gives them the advantage they need to be entrepreneurs and leaders in their industry.

There are times when the Egyptian zodiac sign Thoth can be impatient and hasty with their decisions. They don’t wait to see what the outcome of a project or situation will be. They will react too quickly, putting obstacles in their path that don’t need to be there.

They have a hard time dealing with betrayal. They can be so naive that when someone betrays their trust it can make them question everything they thought they knew. They have a hard time seeing anything negative in other people and will trust people based on their word alone. This could send them into a depression because they feel everything they know has to be questioned.

They have strong opinions and have a hard time seeing another person’s point of view. They can become irrational when it comes to changing their views. Though they are good problems solvers, they believe their solution is the only solution and may be difficult to work with. This can make them very stubborn and confrontational.

This Egyptian horoscope sign people can be restless in nature. They can rush through things trying to get on to something new. They can also be in a rush to achieve success too quickly and may inadvertently sabotage their own progress.

The lucky colour for the Egyptian god Thoth sign is Rose & White.

The sacred animal for this sign is the Baboon & Ibis.

This Egyptian sun sign is compatible with the Bastet and Isis signs.

It is of a baboon or man with an ibis head.

The polarity for Thoth is masculine.