Capricorn Woman And Taurus Man – A Solid And Stable Relationship

These two sun signs meet only through similar interests, as they are both known to be homebodies. The female goat rarely strays too far from home, and the mall bull does so even less. If the Capricorn and Taurus meet at a party it’s more like an intimate gathering, or else they meet in a different peaceful setting.

The Taurus man notices her soft features and she’s attracted to his quiet strength. And once they start talking, they realize just how much they have in common.

Both Capricorn women and Taurus men appreciate beauty in the world, but never spend their money on foolish items. They are ambitious and hard-working, but never let their success go to their heads.

The Taurus male enjoys a comfortable home which she admires, and the Capricorn female is cautious in making decisions which he welcomes. Although they agree to take things slow at first, it’s no surprise to see this couple bring their relationship into the bedroom.

And this is where the Capricorn woman Taurus man partnership becomes stable. They share in the same love of romantic gestures. Their courtship is genuine and honest, since neither one is interested in playing games. And they start slow, offering affectionate foreplay and teasing sexual gestures, until they build to an explosive climax.

The two zodiac signs enjoy the physical nature of their lovemaking, but there’s nothing surreal about it. And the Taurus man has the stamina she’s looking for to take their sexual union to new heights. The Capricorn woman has finally found her match when it comes to working toward ultimate pleasure. There’s nothing false or quick about it. It’s as natural a match as you can find in the zodiac. And when they commit to each other, they are in it for the long haul.

This kind of depth continues outside the bedroom as well, for they make a great team. Whether it’s business or pleasure, the Capricorn woman and Taurus man are usually on the same page. They have no problems managing their household, their finances, or their busy schedules. When they do travel the entire trip is well planned, and all problems are thought of well in advance. 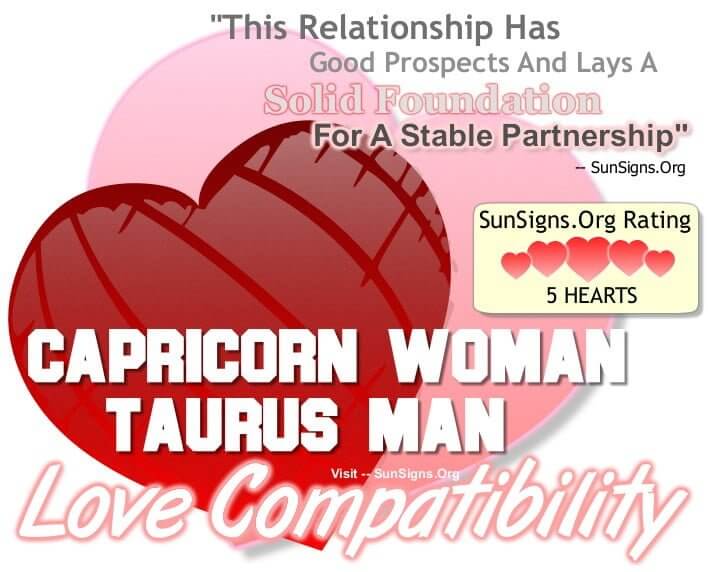 The only time this Capricorn Taurus couple runs into trouble is when things don’t go their way. Neither one is particularly flexible, and they will have difficulty getting through challenging times. Thankfully, they are both calm and rational and can usually work their way out of a jam together.

But if they do have a difference of opinion, the issue will continue unresolved for a while for both star signs are incredibly stubborn. And being as practical as they are, neither one will back down in their solution. It’s hard for either sign to admit when they are wrong, and that will be the one downfall of this couple.

If the Capricorn and Taurus ever out of sorts with each other, they will have to learn to compromise to find an answer that suits both of them. But because they are so similar, this should not be a major obstacle for them to overcome. And once they do, it’s smooth roads ahead for this perfect match.

Capricorn is a cardinal earth sign whereas Taurus is a fixed earth sign, the Capricorn woman Taurus man compatibility gets a FIVE Hearts rating. Overall this relationship has excellent love compatibility between the partners.