How compatible are Capricorn women and Libra men mentally, emotionally and sexually? When an earth sign like the Capricorn woman comes across the air sign of the Libra man, they can either find beautiful weather or stormy skies. She is a pragmatist who doesn’t care about the finer things in life, while he is all about beauty and charm. Compromise is necessary for better love compatibility in this relationship.

The female goat and the male scale enjoy different things in life, so if the Capricorn woman and Libra man meet it’s often at a friendly intimate gathering. She’ll be standing in the corner, casually observing the crowd and he’ll be the social butterfly working the room.

The Capricorn woman and Libra man will notice each other, but being the extrovert he will make the first move. Once they start talking he’ll realize she is a tough nut to crack, for she is careful when choosing friends or lovers. He is spirited and charismatic while she is more down to earth and realistic. Luckily, he is great at communication and he draws her into lively debates.


The Capricorn Libra match can teach each other many things between the sheets – they just have to keep an open mind. She can help him to enjoy the basics of a slow and steady session, and he can broaden her horizons with different sexual techniques. Either way, they are able to learn and grow in each other’s presence.

Libra men always looks at both sides of an issue, and she can appreciate his thoughtful manner. Capricorn women, too, take their time in making decisions.


While the Libra male is okay with her taking care of the responsibilities (since she’ll automatically do that anyway) he also wants them to have more fun. He can help bring the Capricorn female out of her shell to enjoy life more, as long as he lets her plan the details. And she can help him to organize his thoughts in a way that makes him more productive. 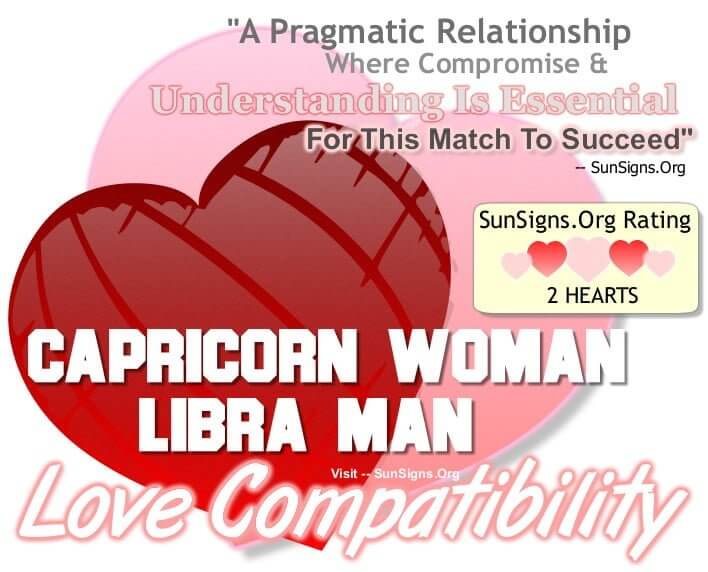 The Libra male can be indecisive while the Capricorn woman is steadfast once she makes her choice. This will be difficult for the two to overcome, although he is always concerned with maintaining balance. Because of this, he will allow her to take the lead in order to keep the peace. And if there is enough of an attraction, the Capricorn female will decide to bring their relationship into the bedroom.


The differences between the Capricorn and Libra sun signs continue here, for she is practical and simple and he is soft and romantic. He offers affectionate gestures and sensual techniques, but she couldn’t care less about that. All she wants is the traditional physical pleasure and he’s more interested in the mental enjoyment of their sexual union.

The Libra man offers new ideas and fun games they could play to make their love compatibility better, but she turns her nose at such frivolity. If he cares about her, he’ll tone down the fantasy to try to keep her happy. But she’ll have to let loose once in a while to satisfy his more playful nature.

This is important to maintain outside the bedroom as well. Even though both signs are usually successful in their careers, she is much more ambitious and he simply enjoys what he does. The Capricorn woman is always climbing the corporate ladder and he would rather be out having fun. She can come to distrust his outgoing personality if he doesn’t curtail his flirty ways, and he may grow bored with her daily routine of work, home, work, home.