Capricorn Woman And Virgo Man – A Grounded And Perfect Match

How compatible are Capricorn women and Virgo men mentally, emotionally and sexually? As fellow earth signs, the Capricorn woman and Virgo man get along famously. They are both grounded in reality and have a strong work ethic. She is ambitious and determined and he is a perfectionist who pays attention to every little detail. Together, these two zodiac signs make a very successful couple.

Since neither sign is particularly social, the female goat and the male virgin are most likely to meet at a business function or an intimate gathering of friends. The Capricorn and Virgo will notice each other standing in opposite corners of the room, casually observing the crowd. As the more dominant personality, she will probably make the first move and their conversations will center around life goals and ambitions.

The Virgo man admires her tenacity and drive to accomplish much in life, and she appreciates his desire for constant improvement. They seem to be traveling on the same path and easily build a life together. Because he is so modest, he doesn’t mind letting the Capricorn woman take the reins on most decisions, and they are often of the same opinion anyway.

Both Capricorn women and Virgo men are equally prosperous in their careers and they would rather save their money for a rainy day than spend it on lavish trips or gifts. And even though they are both cautious in their choices, they will eventually agree to bring the relationship into the bedroom.

Here is where they will see some differences in their personalities, but they are usually complementary. The Capricorn female is slow and steady in her lovemaking, for she has incredible stamina. She doesn’t need fantasy or mind games for excitement, just good old-fashioned physical pleasure. The Virgo male shares in this approach, except he pays attention to the littlest things. He is always trying to better their sexual experience, and she is happy with their tried and true ways.

This is also important for the couple outside the bedroom as well. In reality, their relationship runs like a well-oiled machine, with both sun signs keeping track of responsibilities and life’s mundane details. 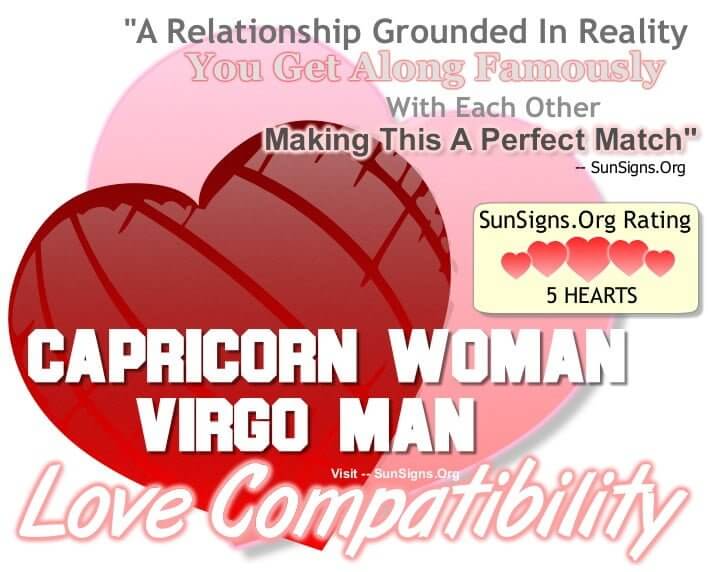 Their stubborn qualities can get in each other’s way during times when they are not on the same page. The Capricorn woman can be fairly demanding when it comes to her career and the Virgo man can be fixated on his own ideals, making them somewhat selfish in their own way.

This may bring about arguments, and since both signs consider themselves to be reasonable people, neither one backs down easily. The Capricorn and Virgo will have to compromise on the best solution sometimes, and realize that they are not perfect.

Sex is where the Capricorn woman Virgo man match might butt heads, as he can be somewhat demanding between the sheets. She is used to taking the lead, so she may be turned off by his sudden strict manner.

The Virgo male will have to learn to back off a bit from the precise nature of his actions and try to let loose, and she will have to do the same. But for the Capricorn female, it’s more about living in the moment rather than always looking toward the future. They are both in it for the long haul so she can relax and simply enjoy their sexual union.

Capricorn is a cardinal earth sign whereas Virgo is a mutable earth sign, the Capricorn woman Virgo man compatibility gets a FIVE Hearts rating. The Capricorn Virgo match are perfect for each other and they have the ability to go far if they can focus on their strengths and cope with their weaknesses. With his persistence and her endurance, they will last forever.