How compatible are Aquarius women and Taurus men mentally, emotionally and sexually? Although the Aquarius woman and Taurus man seem to be opposites, they do share certain personality traits. They are both intelligent and know how to get what they want. But because of this mental acuity these two zodiac signs are both very opinionated. And if those ideas don’t match, neither does the love compatibility in this relationship.

The female water bearer is much more social than the male bull, and she may end up making the first move if they come across each other at a social gathering. The Taurus man is not comfortable in a crowd and she’s working the room, so the Aquarius woman will strike up a conversation with this quiet man standing in the corner.

The Aquarius female curious why he’s observing the party and not joining in, but once she strikes up that conversation she recognizes his reserved manner. This may be a turn-off for her at first, but once the Taurus male shows off his dazzling intellect she’s drawn back into his charm.

Taurus men are great conversationalists and Aquarius women love bouncing ideas off of him, so their discussions could go on all night. He’s much more cautious than she is, but he’s intrigued by her natural beauty and exuberance.

Her confidence is very alluring to him, and his inner strength is very attractive to her. After the Aquarius and Taurus get to know each other, they will move things into the bedroom.

If the Aquarius Taurus match is to find common ground in sex, she will have to take her head out of the clouds and join him on the physical plain, and he will have to let loose and join in her illusions.

These two star signs can help each other broaden their sexual horizons, for he has the stamina to keep up with her. He just has to be willing to try new things once in a while to keep her happy, and she will have to slow down to his pace on occasion.

If the Aquarius woman and Taurus man can keep an open mind, they can learn a lot from their partner. He is a solid foundation upon which to build her ideas and he can help her to achieve more than she ever dreamed. Together, they can create a wonderful life. 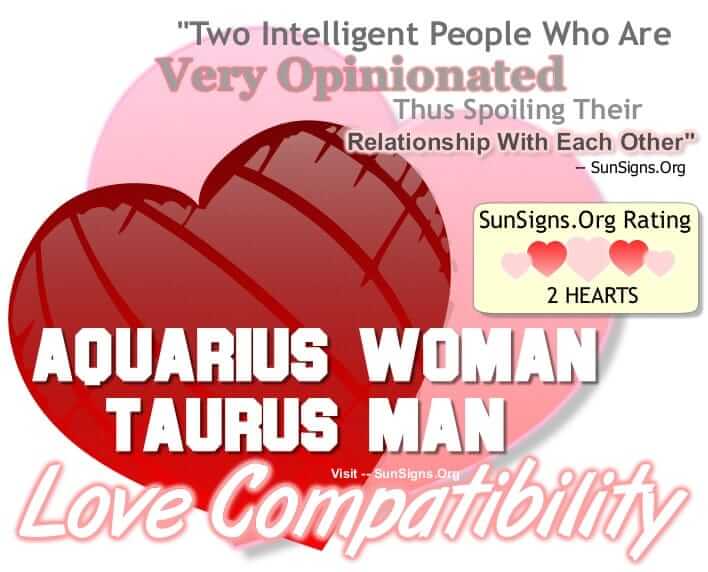 The Aquarius woman Taurus man personalities really differ when it comes to sex, for she is wild and carefree between the sheets and he is steadfast and romantic. He will shower her with affectionate gestures and traditional gifts, but she doesn’t care much for conventional expressions of love.

The Aquarius woman is unique in her way of thinking and would rather play mind games or engage in fantasies to put them in the mood. This is not his style as an earth sign though, for he is more grounded in reality. But as an air sign, she experiences their lovemaking on a mental level.

Compromise on all grounds will be needed in their day-to-day routine as well. The Taurus man is the more responsible of the two zodiac signs, and he will have no problem taking care of the more mundane responsibilities. But he will grow tired of the Aquarius woman wanting to be out and about.

The Taurus male would rather enjoy a quiet evening in the comfortable household he created for them, and although she appreciates his efforts she’s not as interested in staying there. She’s fine with things being a bit messy, and he can’t stand that much clutter.

Aquarius is a fixed air sign whereas Taurus is a fixed earth sign, the Aquarius woman man compatibility gets a TWO Hearts rating. If the Aquarius and Taurus sun signs can keep an open mind, they can learn a lot from their partner.