Taurus As A Mother Personality Traits

The rock solid foundation of love and support from the Taurus mother personality is outstanding.

She is a master of routine, making it nearly effortless to manage the kids on a daily basis.


She is also a very frugal person and will always manage to find the best deals! 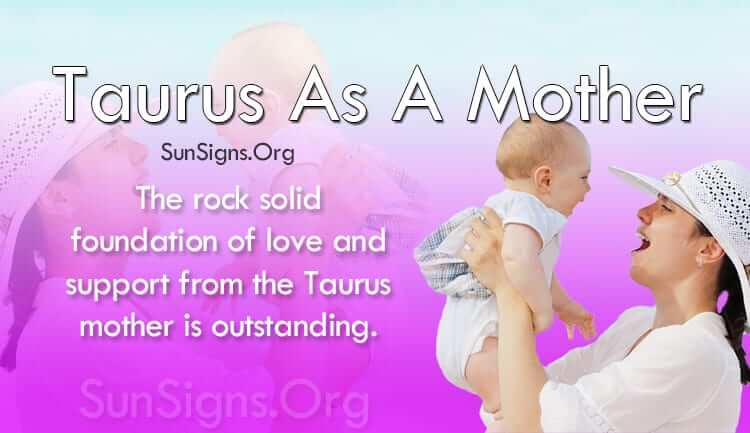 Constantly on the Go

The hardworking Taurus mom’s mind is constantly running on high gear. Whether it is thinking of ways to improve financially, life at home or her romantic relationship with her partner. The Taurus mother personality traits show that she keeps a rigid daily routine and puts in her best efforts to guarantee that everything will go in accordance to the schedule.


If she’s not driving her kids to school or their extracurricular activities, she is attending their school plays and sports games to show them that she cares. The unconditional love she has for her family provides a foolproof foundation for them to grow up happy, nurtured and confident.

Like the Taurus father, she is also very affectionate and protective of the people she loves. However, this Taurus parent is not always the best at expressing her thoughts or feelings. Sometimes it may seem like she is not appreciative of what her children have accomplished, but that is simply not true. The Taurus mother traits show she thinks nothing but the best of her kids but has difficulty putting it into words. She expresses herself better through actions than in words, at least!

The Taurus woman holds financial stability in high regards so budgeting and frugality never escapes her mind. As a sensible shopper, she is keen on hunting for the best possible deals in order to save as much money as she can. After all, if there is money to be saved, it should be done!

The Taurus mother personality traits show she frowns upon any sort of wasteful behavior, especially in terms of money and food. Raising her children to share the same sentiments is an absolute dream! Food is another important aspect in a Taurus mother’s life.


The Taurus mother characteristics show she aspires to provide rich, flavorful foods to her family and is the main reason why most Taurus women are phenomenal cooks! This could be dangerous if the family is sedentary because delicious food and inactivity is a recipe for disaster. Because Taurus women have a love for nature and the outdoors, the majority of families have discovered the perfect balance of top notch home cooked meals and staying active.

The Taurus female is a very traditional woman, raised on conservative values. Pairing this with her exceedingly stubborn ways, she contends with the fact that her children will not always act the way she expects them to. Despite that, this Taurus woman personality is a constant pillar of support for her children’s interests, she is more in favor of them building their lives around a practical career.

The Taurus woman traits show she would rather have her children become doctors with an interest in art than vice versa. Depending on the Taurus, it is not unlikely that she could get to the point of becoming quite controlling and unpleasant to work with. Though she is adamant on passing on her beliefs, it is wise to try and be more understanding, even accommodating, of her children’s wishes and aspirations in life.

Wants to be Revered

In a Taurus mother’s pursuit of giving the best to her family, she is often caught up with the idea that there is a strong correlation between social status and material things. She wants to be seen driving her children to baseball practice in a brand new deluxe vehicle adorning a pair of Versace sunglasses.

Although this conflicts with her frugal ideologies, The Taurus mother characteristics show she wants the reassurance that everyone else is looking up to her family as the “model family”. Similar to the Libran parents, the Taurus mother needs to find a way to show her children that everything should be earned and not just given to them when asked.