Aries As A Mother Personality Traits

When people refer to a strict and reliable mother figure, an Aries mother personality would be the perfect fit.

She works herself to the bone in every possible part of her life.

The Aries mother traits she stops at nothing to obtain her rightful place as the champion. Let’s take a look  at the Aries woman as a mother. 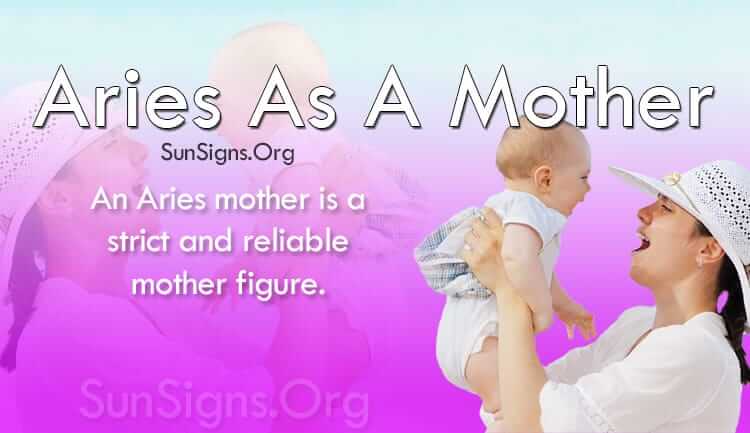 The Aries mom personality is probably one of the best role models for her children. Quite the ambitious woman, she is your typical workaholic on a never-ending journey in self-growth. It is not unusual for an Aries to go back to college for yet another degree to advance through the ranks in her career.

Behind each and every step that she takes in life, is a long meticulous planning process. It is safe to say that she rarely ever makes rash decisions! Even with her overflowing daily schedule, the Aries mother personality traits show she will find time to support her children with no exceptions! She will be there for every single event in her child’s life, cheering as hard as she can.

However, even the most extreme of workaholics will need a nice, relaxing vacation away from it all on occasion. Yes, even away from her children! Having a sense for what truly matters to herself gives her children the impression that adults have different needs and priorities than they do. This indirectly teaches the Aries woman’s children the idea of personal responsibility as well as allowing them to think critically about their own lives.

When it comes down to house rules and boundaries, there are absolutely no exceptions whatsoever. Rules are rules and if you don’t abide by them, there will be consequences!

The Aries mother traits show she does not falter at the sight of her sad children, their constant stream of pleas and especially not when they start throwing tantrums.

Call it tough love or whatever else you wish, but it works and it works well for this Aries parent. Refusing to give in or making exceptions to the rules lets the children learn their place and they will have a good set of guidelines to follow when they become rebellious teenagers.

She wants to be viewed and considered as the ultimate mother fostering budding kiddie champions. There are times when the bluntness and brutal honesty of the Aries mom characteristics becomes a bit overbearing for her children but they do respect and appreciate the feedback. After all, the greatest lesson comes from making mistakes!

Being the proud, competitive woman that she is, the Aries mother personality traits show she can be prone to excessive bragging. Though she will not actually ask for recognition of her efforts, it is not beyond her to organize special outings with her closest friends just to talk about herself for hours on end!

As with anything, there needs to be a balance and this could result in the Aries women being quite lonely characters if the bragging is not under control. Another personality trait of this zodiac sign that could potentially cause issues is her inability to mask her anger. She wears the emotion on her face, includes it in her speech, in her actions and will have occasional explosive outbursts.

The Aries mother characteristics show she is generally not afraid to speak her mind but when she is upset, it is not recommended to be around her. This is not an exception when it comes to being upset with her children either. Figure out a way to be more patient and sensitive with the children or they may distance themselves from you in fear!