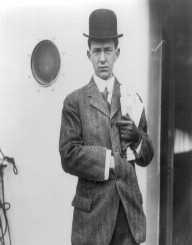 Stuart Collett was one of the lucky passengers who survived the tragic sinking of the RMS Titanic cruise line.

Born in Essex, England on January 8, 1887, as Sidney Clarence Stuart Collett, he was the second child of Ann Pinfold and Mawbey Ernest Collett. Collett has four other siblings, and six other half-siblings from his father’s previous marriage.

In 1910, Collett’s family relocated to New York where they settled in Port Byron where his father served as a pastor for the First Baptist Church. Around this time, his brother Thomas started attending Syracuse University as a student and Collett decided to join alongside his brother in the same university.

Originally, Collett was not meant to board the Titanic. He was supposed to board the St. Louis but was unable to secure a berth on time. He then attempted to sail on the ship called Philadelphia but its voyage was canceled due to the coal strike. Left with no choice, he was to board the Titanic as a second-class passenger and brought alongside him a number of valuable family possessions that consisted of family documents, a valuable library, and a considerable amount of money. Prior to his voyage, he sent a letter to his mother containing a second envelope that they ought to open in case anything unfortunate happened to him.

Before boarding the Titanic, Collett’s aunt instructed him to look after a lone lady named Marion Wright who boarded the ship to travel her fiancé, and her companion named Kate Buss.

Collett has just gotten to bed the night of April 14, 1912, for 10 minutes before the cruise liner collided with an iceberg. He ran on deck to see the event unfold and quickly picked Miss Wright and a few pieces of clothing and boarded Lifeboat 9 and watched as the ship sank at 2 am the next morning. Later on, they were saved by the ship Carpathia and brought to safety.

After the event, Collett carried on with his life and continued his studies. He attended Ohio’s Dennison University in Granville and intended to enter Rochester Theological University. Being a lonesome individual, he became a subject of hazing for a few of his block mates which ended up with Collett having a cross-shaped brand on his forehead.

Records have shown that Collett died in the first quarter of 1941 in Islington, London.