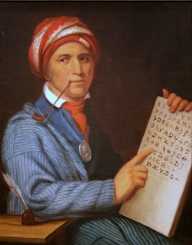 Sequoyah was a Native American Cherokee who was credited with the formulation of the tribe's linguistic alphabets.

Sequoyah was born in the period between 1770 and 1775 in the region of Taskigi in today’s Tennessee USA. Historians still speculate about his paternity and date of birth. Most believe his father was the Nathaniel Gist, an Englishman who traded in animal fur. His mother was Wuh-Teh, a Native American of the Cherokee clan. Sequoyah was abandoned by his father and raised by his single mother. Apparently, his name Sequoyah is translated as the foot of a pig in his native language.

Living in a native lifestyle, Sequoyah learned the common trading life of his tribe. He graduated into a merchant dealing in animal fur and hides. At one time he suffered an injury that changed his life. He became permanently crippled by the accident. His hunting and fur business was grounded. Disabled people were constantly looked down upon. This forced Sequoyah to relocate with his household to Georgia.

To sustain his living, he became a smith in silverware. His artifacts were highly sought by the white American traders for their originality. The business grew and Sequoyah had many American friends. In 1812, He managed to convince other Native Americans to join the US army in fighting the warrior forces led by Tecumseh. The war was later known as the Battle of Creek. This was because it was fought in the Creek Native American territory. Tecumseh and his warriors were pacified.

Like many other natives, Sequoyah was literate in his traditional ways. Education was verbally passed from generation to the next. The system of the white men was different. They had schools and books. In his wisdom, Sequoyah believed that the whites were superior due to their better formal education. This belief was cemented when the US army defeated Tecumseh in 1812. Tecumseh was a revered Shawnee Native American leader with exceptional leadership abilities.

From 1809 to 1821, Sequoyah carefully crafted the 86 alphabet symbols of his Cherokee language. He was helped by his daughter Ayoka, in the identification of phonetics and crafting of the alphabets. Though he was illiterate himself, he managed to incorporate the English and Greco Latin Alphabets in his combination of symbols. He ultimately presented his work to the tribal council in 1821. The elders appreciated and endorsed his work. His twelve long years of studying came to the limelight. In the next three years, the Cherokees were almost entirely literate in their new syllabus.

With the success of his literacy findings, Sequoyah relocated to study other Native American languages, particularly in Oklahoma in 1828. His presence and educational activities made him rise to a political figure. In many occasions, he led delegations to the US capital Washington DC to champion for the rights of the natives. In his later years, he traveled the Cherokee nation educating them on the need to be literate in their own language.

As a result of his alphabet, the Cherokee nation became more conscious of their history, culture and daily life. In 1824, three years after presenting his work to the elders, the Council awarded him a pension of 300 US dollars. Historians believe this was the first recorded formal pension plan in the history of modern America.

The following year, the white American missionaries managed to translate the Bible and other Christian literature into Cherokee. This made their missionary work easier since the Cherokee could read the Bible in their own language. Two years later in 1827, the most dramatic event happened. The Cherokee published their own newspaper. This milestone made the Cherokee and Sequoyah literary ambassadors in the Native American tribes.

Most of the southern Cherokees had migrated into Mexico during the American war of independence. Sequoyah died in one of his travels to educate the Cherokee in August 1843. After his death in San Fernando in Mexico, nothing much is known of his burial site.

The Native American tradition values the environment. This was again portrayed when the Cherokee named some tree species after him. The giant trees are found in the Sequoyah National Park. This is a park named after him in California.

The invention of the alphabet by Sequoyah transformed the Cherokee nation. The most significant thing is the revolution was brought about by an illiterate, crippled and abandoned child who was regularly ridiculed for not having a warrior father.