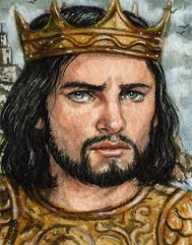 Whether he lived or not, King Arthur is still the most captivating figure in the British folktales.

King Arthur was said to be the son of medieval Celtic King Uther Pendragon in medieval ages. Using magic, Uther was transformed into another man so that he may sleep with the man’s wife. Arthur was conceived. Most scholars place it around the 1100s. As the crown prince, his father feared for his safety.

His kingdom was full of internal intrigues and external aggression. As was the custom of most kings, Uther had a royal advisor called Merlin. Merlin was well versed with magic. Upon Merlin’s advice, King Arthur was raised in a secluded place without even himself knowing that he was a prince.

King Uther soon died without an apparent heir to the throne. With the kingdom in a succession power struggle, Merlin came up with a solution. Using his charms in magic, he drove a royal sword into a rock. The sword stuck in the middle of the rock. The inscription was simple. Whoever pulled the sword out of the stone would be the king. That only a person with a pure heart would pull it out.

Young and old, people came in droves to try their luck in pulling out the sword. One day King Arthur went out with his friends for a gladiator tournament. Since his friend had no armor, Arthur decided to pull out the sword for his friend. Without his knowledge, he pulled out the sword to the delight of many who hailed him as their new king.

King Arthur's first task was to bring back peace and order. He created a band of trusted knights. Since they used to sit on a roundtable, they became known as the Round Table Knights. He defeated the advancing Anglo Saxons from the north and set his base at Camelot. After his victory, the English kingdom became peaceful for a while. The warrior king fought many battles, and his people were prosperous.

Since his kingdom faced many foes, Merlin advised him to get spiritual protection. King Arthur got the magical sword called The Excalibur from the Lady of the Seas. This was a mythical figure which ruled the seas as a goddess. With the magical sword, Arthur defeated all his opponents.

With his magical sword, King Arthur turned his sights on the search of the Holy Grail. This was a mystical cup that is said to have held the blood of Jesus Christ. Nothing shows that Arthur was a Christian believer in the folklore. He commissioned his knights to embark on this sacred duty. Many years of the search proved futile. None of the legend stories tell where the search parties went in pursuit of the holy cup.

His knights were well acclaimed for their loyalty. One of his dependable knights was said to have an affair with the king’s wife. When King Arthur discovered of the clandestine affair, he sentenced his wife, Guinevere to death. Prior to that, Royal knight Lancelot had killed several knights who had tried to capture him during a roundtable meeting. Eventually, he fled from the city. From the woods, Lancelot staged a recovery mission to rescue the queen. A war ensued between the royal knights and Lancelot’s group.

King Arthur's immediate family went against him. His sister Morgan and own son Mordred staged an attack on the city castle of Camelot. Unable to defend his kingdom this time, Mordred overthrew his famous father. King Arthur returned and killed his son. With his throne back to him, Arthur had suffered a life-threatening injury. The king gave his magical sword to his loyal servant Sir Bedivere. He was instructed to throw it back into the sea.

A hand believed to be of the sea goddess appeared and grabbed the sword back into the sea. Immediately, a ship appeared with three fairy queens and the king was taken aboard. It was said that he was taken to a mysterious island called Avalon for his healing. King Arthur was never seen again. For generations, many people waited for his return.

Years later, a skeleton believed to be of the noble king were discovered and buried in England. Whether that was indeed Arthur’s skeleton or not is hard to discern.

Fiction or fact, the legendary story of King Arthur has fascinated many for centuries. He has been reinvented in stage plays, movies, and even cartoon characters. The story has been translated into several major languages in the world.