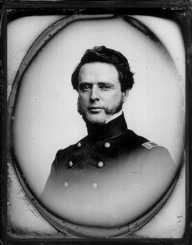 Joseph Hooker was born on 13th November 1814, in Hadley, Massachusetts, in the United States. He started school at Hopkins Academy, and he then studied at the United States Military Academy. He graduated in 1837 with the rank of Second Lieutenant.

Joseph Hooker began his military career in Florida. He fought in the Seminole Wars, followed by the Mexican-American War. In 1848, after the Mexican-American War ended, Hooker worked as an Assistant Adjutant General. He resigned in 1853.  Hooker testified at a court-martial against a commander he had served under and due to this had to leave.

Hooker turned to gamble, alcohol, and women when he failed to cope with normal civilian life. He unsuccessfully tried to enter politics in California, and he then tried to rejoin the Army as a Lieutenant Colonel. His request fell on deaf ears. In 1859, Hooker joined the California militia and served for two years.

In 1861, the Civil War began. The military rejected Hooker's request for a commission. Due to this, he then wrote to President Abraham Lincoln directly. Hooker complained about the military's treatment of him and asked for a commission yet again. As a result, Lincoln granted his request in August 1861. He joined the Army as a Brigadier General and commanded troops near Washington, D.C.

In 1862, Hooker commanded a Division in the Peninsula Campaign. As the battles continued, Hooker made a name as a good fighter and leader. He received a promotion to Major General within a short time.

Joseph Hooker continued to fight in several campaigns for the Union, including the Second Battle of Bull Run. In September, Hooker received another promotion, to Brigadier General.

In December of that same year, Hooker led his troops in the Battle of Fredericksburg. Hooker's men suffered significant losses, and Hooker openly criticized his superiors.

Joseph Hooker prepared a battle plan to win the war against Robert E. Lee and the Confederate Army. Unfortunately for Hooker, Lee had a better idea, and the Union retreated. Hooker suffered a concussion after an injury. As a result, he lost the confidence of his generals when he refused to step aside while recovering.

As the months passed, Lincoln became more and more restless. At the same time, the generals continued with their lack of support for Hooker. Hooker resigned in June 1863.

Joseph Hooker transferred to Chattanooga, Tennessee, when his command at Chancellorsville finished. He commanded troops and rebuilt his reputation, and he took part in several battles and campaigns.

He led the Battle of Lookout Mountain with no credit for the part he played. Hooker also commanded the corps in the Atlanta Campaign of 1864. Hooker led the Northern Department, which took in the four states of Illinois, Ohio, Indiana and Michigan. He stayed in the role until the war ended.

During his years in Cincinnati, Joseph Hooker married Olivia Groesbeck.