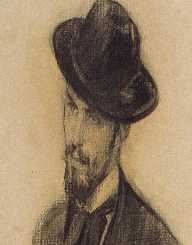 Joaquin Torres Garcia was born on July 18, 1874, in Montevideo, Uruguay. He was the oldest child of Joaquim TorrasFradera and Maria Garcia Perez. As a child, Torres-Garcia received little formal education but showed major interest in his surroundings. In 1891, his family moved to Mataro, Spain. There he began studying with a local painter. In Barcelona, Torres-Garcia enrolled in the School of Fine Arts in Barcelona, and later attended the Baixas Academy and the Saint Lluc Artists Circle.

In 1893, when Joaquin Torres Garcia was attending the Cercle Artistic de Sant Lluc, he began working as an illustrator for periodicals and books. His works were seen in Barcelona Cómica and Jacinto Benavente's La Vida Literaria. He began painting frescoes in 1901, adapting the style of the French artist Pierre Puvis de Chavannes. A major turn in his career came in 1903 when he paired up with architect Antoni Gaudi and began working on stained glass for the Sagrada Familia Cathedral in Barcelona.

In 1913, Joaquin Torres Garcia published his first book Notes of Art and founded the School of Decorative Arts in Sarria. He began publishing texts about Noucesntisme. In 1918, Torres Garcia turned his focus towards designing wooden toys. For the next decade, he did not participate in any theoretical discussions and did not publish. He relocated to New York in 1920 and painted several portraits. His works were featured in several exhibits, including at the Society of Independent Artists and The Whitney Studio Club.

Joaquin Torres Garcia’s wooden toys began to be manufactured for sale in 1922. He meant them to be teaching aides, but instead, the toys became very famous art pieces. While in New York, he continued to design these toys. In 1930, Torres Garcia together with Piet Mondrian and Michel Seuphor founded the Circle and Square magazine. The main goal of the magazine was to provide alternative art style to the dominant Surrealist movement. Together they organized several exhibitions and made several publications.

In 1934, Joaquin Torres Garcia returned to Montevideo and founded the Association of Constructivist Art in Montevideo. The main aim of the association was to promote the importance of schooling and modern art. He also began publishing the Circle and Square magazine in Uruguay. In 2934, Torres Garcia established the Taller Torres-Garcia Constructivist school, which was a major influence on artists around the world. During the last years of his life, Torres Garcia painted seven mural frescoes at the Hospital Saint Bois. In 1944, he published the UniversalismoConstructivo, his most influential theorist work.

He was considered to be the founder of the UniversalismoConstructivo painting movement. In 1934, Joaquin Torres Garcia became the honorary professor of the Faculty of Architecture of Montevideo.