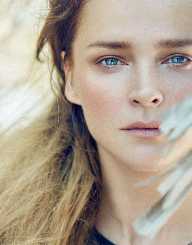 Born in Estonia on the 14th September 1978, Carmen Kass was brought up by her mother in Mao village. Her father lived elsewhere as the couple had separated. Her father, who did not have much to do with her upbringing, is a lecturer in the game of Chess. Kass has a sister and a brother.

Carmen Kass was enrolled at the Lee Strasberg Theatre and Film Institute in New York City.

At the age of 14, Carmen Kass was scouted in a supermarket. She moved to Milan in 1996 to further her career and after that moved to Paris. At 18, she was starting to appear on the covers of French Vogue and other fashion glossies.

By 1999, Kass was well established as a runway model and a modeling highlight for her appearance in the Victoria’s Secret Fashion Show. She was also started to star in high fashion advertisements for brand leaders such as Gucci, Marc Jacobs, and Versace.
Carmen Kass said to have been one of the highest-paid models in the world; although her current net wealth shows as a relatively modest $US2 million.

By 2000, Kass was at the height of her career. She appeared as the face of Christian Dior’s J’adore fragrance and also won the VH1 Vogue Model of the Year Award.

Carmen Kass has appeared on film, including Welcome to America and Point and Shoot. She starred in an Estonia film Täna öösel me ei image (2004) which was released in English as Set Point. The title of Estonian being We Won’t Sleep Tonight.

Her mother runs Baltic Models, and Kass is part owner of the business.

In 2000, Carmen Kass was awarded the Vogue Model of the Year award at the VH1/Vogue Fashion Awards.

Carmen Kass ran for a seat in the European Parliament but lost (2004).

She dated Leonardo DiCaprio and Richie Akiva (1999-2004) and Eric Lobron, a chess champion from Germany.

The game of chess is one of her primary hobbies. Her father is a chess tutor. In 2004, Kass was elected President of the National Chess League.

The New York Times published an article entitled I’m the Richest Girl in Estonia (2001), and Several parodies of Carmen Kass have appeared over the years.

Her sister Victoria was once on parole for three years for drug trafficking charges (New York Fashion News).