Feng Shui, if one follows the Chinese tradition, is mainly concerned with the flow of energy, known as qi. There are positive and negative energies at work in the world. Positive energies bring luck, prosperity, health, happiness, and good relationships. Negative energies sap all of those things, and to no one’s surprise, negative energies are to be avoided at all costs. Not only do certain objects affect qi, but also the placement in a given space affects it as well. If one is contemplating giving a gift to someone and wants to follow Feng Shui etiquette, there are certain things to keep in mind. Here are a few tips to give the right Feng Shui gifts to your friends and family for good luck, wealth, happiness and much more.

A compass is important in Feng Shui because it is considered a spiritual guide. So much depends on the spatial organization of one’s home or office, that a compass is a must. To use a Feng Shui compass, one must divide it into 24 directions, rather than eight, to have more precise measurements. If the recipient is new to Feng Shui, giving him or her a book with instructions along with the compass is a thoughtful touch.

A plant is considered agreeable. But only if it is one of a few varieties, such as bamboo, a rubber plant, or a palm plant. Bamboo is the most popular because it is low maintenance and can grow in almost any amount of light. Why are certain plants considered lucky? They represent nature; they also purify surroundings and bring good qi, or energy into the room. The best time to offer this gift is at the beginning of a month or a year. It may symbolize a healthy beginning for the recipient.

Feng Shui is made up of five elements: wood, fire, earth, metal, and water. Each element corresponds in some way with the next in line. Wood feeds the fire, fire makes the earth, earth creates metal, metal holds water, and water nurtures wood.

An entire cycle usually represents the elements. Candles are a strong representation of fire in the home, for example. The flames symbolize life-giving energy. Not only that, but they also destroy negative energy which is something significant to followers of Feng Shui.

Like anything else, there are certain places where candles are the most effective in the home, such as south, southwest, northeast, and center. The color of the candle should reflect the element it represents as well. Fire colors are red, orange, purple, pink, and yellow. Candles are most effective when they are the proper colors.

A gourd called a Wu Lou which gives the owner good luck. It is especially helpful for sick people. Wu Lou comes from an ancient tradition. It consists of different materials. This includes copper (to hang on either side of the bed of a sick person) or black obsidian or onyx to soak up negative qui, It can also be a natural, dried gourd (hung at the top of a window or door that faces a police station, cemetery, hospital, or other negative space) scatters sha qi, or negative energies. Pay attention to the needs of your intended recipient before deciding what kind of Wu Lou to give.

One of the best Feng Shui gifts may be housewarming salt. It is said to have cleansing energy. The best way to use this gift is to sprinkle the salt on the floor, especially in the corners, and let it sit for 24 hours. In that time, the salt (considered a crystal) absorbs the energies of the people who lived in the space before. That is the cleansing energy. After the 24 hours are up, it is best to remove the salt, as it is now contaminated.

Wind Chimes (mostly) placed outside the home, counteract negative qi before it enters the house. Like Wu Lou, wind chimes may be made out of different materials and placed in different locations, all depending on one’s goals.

Ask the recipient what is most important to him or her. Symbols play an important role in these goals. A Chi Lin wind chime offers protection, while a mystic knot one gives abundant positive energy. A wind chime made of clay with two hearts is good for love (place it in the southwest corner of the lawn). A Buddha symbol helps with spiritual growth when placed in the northeast.

An image of a dragon is a strong symbol of yang or male energy. Also, if the dragon is holding a crystal or a pearl in its claw, it stands for power, wealth, and opportunity. Interestingly, dragons are considered cures for some ills, and the color of the dragon changes the purpose of the cure.

A golden dragon cures a lack of wealth, while a green one cures bad health. It is best to place the dragon in the east side of the main living space, but not above eye level.

If a gift is for a couple, it is best to give a pair of something. In the Feng Shui tradition, it is bad luck for a couple to have single items in the bedroom. Single items do not stimulate romance. Rather, they invoke feelings of solitude. Giving two of something acknowledges both beings in the relationship.

Another suggestion is to make the gift something red. Red encourages passion and a sense of adventure. Keep in mind, however, that if the gift is red, it would be best if the pair of items came from the elemental family of fire in order to be consistent.

Something Westerners may not know is that the rice thrown at weddings came from the Feng Shui tradition. If a couple wants a child, rice is a traditional gift of fertility in many parts of China.

There are differing opinions about this; some say nothing should be under the bed, while others recommend a bowl of rice should be placed under the bed if a couple is trying to conceive. If the recipients believe the later, offer them a nice porcelain or china bowl filled approximately two-thirds with uncooked rice.

The bowl should not be disturbed until a child is born. This is a touchy subject for most couples, however. Be sure you are not stepping on any toes before you do this. 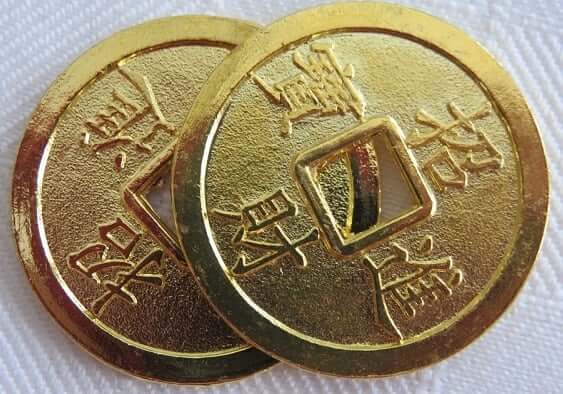 Lastly, if a friend is having money troubles, Chinese coins (round with a square hole in the middle) tied with red cord are considered lucky and can be used for protection. There are some ways to do this.

One way is to hang the Chinese tassel on the wall in the southeast area of the home. This is considered the traditional money spot of the home. The nice thing is, one’s tassel does not have to be in plain sight.

Another option is to carry three coins tied with red ribbon in one’s wallet. If the gift giver wants to give a fancier version, there are some pre-made tassels available with crystals included. The crystals are a conduit for good energy and cleansers when it comes to negative.