Kabbalah is an age old Hebraic form of mystique which when used with the method of tarot card reading leads to the popular Kabbalah Tarot.Tarot card reading is a very popular method of fortune telling. These are basically a set of 72 cards. 22 of these cards are used to make prophecies about life and death and virtues and vices.Kabbalah according to many means receiving which in turn means getting knowledge from heaven itself. The concept of Kabala is said to precede any religion and to be an astonishing disclosure from god to humanity.

A preacher of Kabbalah is called a Mekubal. Kabbalah offers an explanation to various questions of the metaphysical study of nature of being and existence. It aids in explaining the methods to achieve spiritual realization. The Jews are supposed to have conceived Kabbalah. The Jews have often disseminated the teachings of Kabbalah. These teachings have been used time and again by the followers of Judaism to explain the rabbinic literature and the Hebrew Bible. 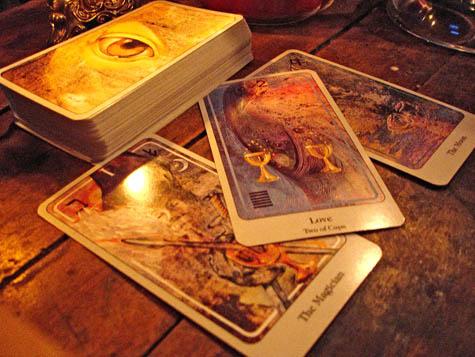 Some of the Jewish religious practices are explained through these teachings. Many believe that Kabbalah originated before some of the oldest of world religions and thus must have the blueprint, so to speak, for the formation of many religions, arts, and philosophies. It dates back to 12th and 13th century in Southern France and Spain. It was later on yet again interpreted in the Jewish mystical renaissance of 16th century. It became popular during 18th to 20th century leading to its academic investigation.

The path joining the two sephiroths of the tree of life is marked by Kabbalah Tarot. There are twelve paths, altogether, of the Kabbalah tree of life. Each of these paths corresponds to a card in the tarot cards. The card governs the virtues and vices and the characteristic traits and thus helps in making forecasts.

It also helps in knowing the lucky color, day, and planet. This process in turn facilitates a person to take steps to bring amendments which might lead to a better future. These steps normally include using more of the lucky color and wearing stones representative of the lucky planet etc.

The Wisdom in the Major and Minor Arcana tarot cards plays an essential role in connecting the ancient form of divination to the traditional Hebraic astrology. Atziluth, Briah, Yetsirah, Assiah are the four essential worlds of Kabbalah. The four worlds are related to the elements Fire, Air, Water and Earth.

The free Kabblah Tarot test for 2014-2015 presented over here gives a clear idea of the characteristic traits of a person. All one needs to do is enter his or her name and date of birth. The free report that comes up as the result of this process contains the attributes if sephiroths associated with the sun sign.

The Kabblah Calculator also makes predictions about the future and an explanation for the same. The system of Kabbalah tarot reading is trusted by many and so one must try this tool out, especially now with the advent of New Year 2014.