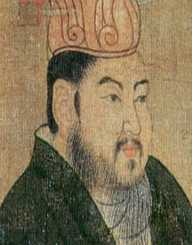 Yangdi was the son of the first emperor of the Chinese Sui dynasty. He ruled China as Emperor Yang from 604 to 618.

Yangdi was born Yang Ying in 569 in Sui, China. His father Yang Jian was the Duke of Sui. Yang Jian changed his son’s name to Yang Guang after advice from the spiritual leader of the town. Yangdi studied the classical Confucian syllabus like all children of nobility in China. Yang Jian favored his second born Yangdi because of his physical and intellectual abilities.

In 580 Emperor Xuan died. Yang Jian ruled as the regent on behalf of the young emperor’s son. In 581 Yang forced the late emperor’s son to abdicate the throne, He declared himself the emperor and assumed the title Emperor Wen of the Sui dynasty. As a prince Yangdi served in the military as one of its top commanders. In 588 Emperor Wen invaded the Chen dynasty. Yangdi and his elder brother Yang Jun led the military offensive into Chen territory.

After the victory in Chen, the Crown Prince Yang Jun lived a carefree life. He engaged in alcoholism and was involved with extramarital affairs. He lost favor from his parents. Yangdi saw the opportunity to depose his brother. He portrayed himself as being faithful to his marriage and listened to the royal counselors. Eventually, Emperor Wen stripped Yang Jun of his royal title and made Yangdi the Crown Prince.

In 604 Emperor Wen died. Yangdi succeeded his father. He killed his elder brother to stop any rival claim to the throne. Yangdi assumed the throne as Emperor Yang. Yangdi was a zealous leader. He embarked on the industrialization of his empire’s infrastructure. He believed in food security and internal stability. Yangdi commissioned the construction of two mega canals in China. He built the Tongji canal in two phases. He first connected Luoyang with the Yellow River. After it was finished, he connected another canal from the Yellow River to Huai River. Yangdi reconstructed and reinforced the old Han canal. Yangdi completed the monumental task with almost half of the workers dying during the construction period.

He constructed two other food storage facilities in Luokou and Huiluo. These storages helped in the conservation of surplus grains left during the harvest season. Yangdi also spent considerable resources to construct royal palaces for himself. Yangdi became the heroic emperor.

To consolidate his power, Yangdi made foreign excursions into other territories. He conquered several neighboring empires, thus expanding his territory. He used the resources in the annexed regions to bolster the construction ambitions in his native Sui Empire. Yangdi extended his empire to Vietnam and Central Asia. He did not bother much about the cost of his military expeditions. Yangdi made his campaigns at all cost just to conquer what he wanted.

Emperor Yang became more ruthless to the citizens. He imposed punitive taxes in order to fund his projects. He started living an expensive and extravagant life to the expense of the poor subjects. Ynagdi’s food security policy was abandoned in favor of his lavish lifestyle. The citizens staged several rebellions which were successfully pacified. In 618 senior army officers of his empire attacked his palace. They captured the emperor and held him hostage within the place. When he realized that the rebellious military officers had staged a coup on his regime, Yangdi opted to commit suicide. He tried poisoning himself but the palace did not have any lethal concoction. Eventually, he gave up and surrendered to the soldiers. He gave his scarf to one of the soldiers to strangle him. Emperor Yang died of strangulation in the palace rather than face the humiliation of public execution.

In 582 Yangdi then still Prince Yang Guang married a princess of the Liang dynasty through an arranged political marriage. In 605 she became Empress Xiao when Yangdi assumed the throne as the emperor. They had two sons and a daughter.

Like other imperial rulers of China, Emperor Yang had numerous royal concubines. He fathered several other children with the palace concubines.

Yangdi was a progressive leader who stabilized his empire with mega projects. He majored in infrastructure development to bolster the agro economics policies he envisaged. He also modernized his military with new arsenal. He expanded his territory to consolidate his influence in the region. In his late years, he lost touch with his subjects. He focused solely on his lavish life and the construction of his projects at the expense of his imperial subjects. He paid with his life.