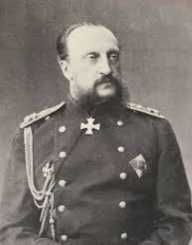 Nicholas Nikolaevich was a Russian duke who also served as the commander-in-chief during World War I at the battle between the Germans and the Austro-Hungarians.

Nikolaevich married the daughter of King Nicholas I, Princess Anastasia of Montenegro on April 29, 1907. She was previously married to the 6th Duke of Leuchtenberg, George Maximilianovich until their divorce in 1906. From her marriage to Maximilianovich she bore him two children but she and Nikolaevich did not have any children at all.

Born on November 18, 1856, in St. Petersburg, Russia, Nicholas Nikolaevich was the grandson of Emperor Nicholas I of Russia from which he was named. In the Julian calendar, his birthday is stated as November 6, 1856. He was also given the title as the Grand Duke and was nicknamed as “Nikolasha” within the Imperial Family.

Nikolaevich was also fond of hunting and is a well-known hunter within his family at the time. While hunting, he took with him his pack of borzoi, a breed of Russian hunting dogs exclusive for the nobility at the time.

Besides being born into a family of royalty, his family also had a long line of military careers. As such, Nicholas Nikolaevich attended the school of military engineers and received his first assignment in 1873. He also worked under his father’s command during the Russo-Turkish war from 1877 to 1878. Despite having connections, Nikoleavich strived and worked his way up into the higher ranks until 1884 wherein he attained the position of the commander of the Guard Hussar Regiment. As the commander, his contribution to the regiment is mainly reflected in the equipment and training.

He achieved the position of inspector-general in 1895 which he held for ten years until 1905. Coincidentally enough in the same year in 1905, he was asked by the Tsar to assume the position of a military dictator in contrast to the reform proposal of Count Sergei Witte to the growing anarchy at the time. Nikolaevich caused a scene at the palace wherein he threatened to shoot himself if the Tsar forces him to take the dictator title but the Tsar opted to accept the reforms instead.

Stripped of his title as the commander of the Russian army, Nicholas Nikolaevich was appointed as the viceroy in the Caucasus wherein he put his focus in civil administration. He also tried to build a railway connecting Russian Georgia to their conquered territories but was unable to do so since the fall of the Russian empire in 1917.

Nikolaevich lived most of his later life overseas wherein he and his wife settled in a small chateau in Choigny, 20 miles outside Paris, in France. Nikolaevich died at the age of 72 on January 5, 1929, at the French Riviera and was buried in Cannes’ St. Michael the Archangel Church. His remains were re-buried in May 2015 at the World War I Military Cemetery at the request of the princes of Russia, Prince Nicholas Romanov, and Prince Dimitri Romanov in 2014.