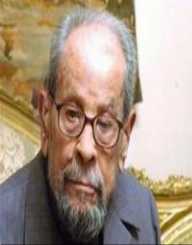 Naguib Mahfouz was an Egyptian Author and Novelist born in late 1911. Most of his work was in Arabic, and he became one of the pioneers of Arabic literature. He won the 1988 Nobel Prize for his work in Arabic Literature. He is best remembered for his work in The Cairo Trilogy which included Palace of Desire, Palace Walk, and Sugar Street. In his seventy years career, Mahfouz authored over 30 novels and three fifty short stories. Some of these works include The Harafish, The Honeymoon and Arabian Nights and Days.

Naguib Mahfouz was born on December 11th, 1911 to a devoted Muslim Family. His place of birth was Cairo in Egypt. He was the last born to Abdel-Aziz Ibrahim and Fatimah. His father was a civil servant. He had six siblings, four brothers, and two sisters. Though his mother was illiterate, she took Mahfouz the Pyramids and the Egyptian Museum to explore their culture.

Naguib Mahfouz began his early education at Kuttab, a Koranic school. He was greatly influenced in Arabic Literature by Hafiz Najib. That is when he decided to pursue the subject. His later influence in his career was through his experience in the 1919 Egyptian revolution. He was seven years old at the time. In 1930 he joined the current Cairo University known as the Egyptian University at the time. By 1934 he was through with his studies and attained bachelor’s degree in Philosophy.  He later studied for M.A in philosophy just for a year. He discontinued his studies to focus on writing as his profession.

In 1935 Naguib Mahfouz began his civil service career at Egyptian civil service. He took the footsteps of his father who was also a civil servant. He later retired in 1971 after serving in different departments.

Some of the best work in his writing profession was Abath Al Aqdar. It was published in 1939.another was Radobis which was released in 1943 and later Khan al-Khalili in 1945. Some of the topics covered in his work were homosexuality, psychological and philosophical issues among others.

Naguib Mahfouz's three novels based on Second World War and the military coup in Cairo with the title The Cairo Trilogy was later published. The first one with the title Bayn al Qasrayn was published in 1956. In 1957 Qasr al Shawq and Sukkariya were both published. His book Awl?d ??ratin? meaning Children of the Alley was banned in Egypt. It was published in 1959, but it was banned for its controversial content.

In the years 1940 and 1980, over 20 of his works were made into screenplays. Naguib Mahfouz became a columnist for al – Ahram newspaper from 1971. He worked for the newspaper till to almost time of his death.

Throughout his career, Naguib Mahfouz earned the Egyptian state award twice. In 1988 he was awarded the Nobel Prize for his contributions in literature. In 1989 he was again presented with the Presidential Medal by the American University at Cairo. Later he received an honorary doctorate in 1899 from the same University.  He was the 1992 honorary member for the American Academy and Institute of Arts and Letters. Later in 2002, he won the nominations to be a member of the American Academy of Arts and Sciences