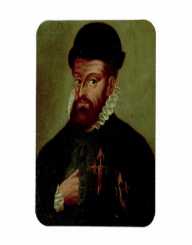 Francisco Pizarro was born in 1475. He was a Spanish explorer and conquistador. He became famous by conquering the Incan Empire.

Francisco Pizarro was born in 1475, as an illegitimate child in Trujillo, Spain. He was born to Gonzalo Pizarro Rodriguez de Aguilar who was an infantry colonel and Francisca Gonzalez Mateos. He did not go to school to get any sort of education. He grew up as an animal tender and herder.

In 1509, he set sail in Alonzo de Ojeda’s expedition to the Gulf of Uraba in the New World. His first expedition failed, and in 1513, Francisco Pizarro joined the fleet of Martin Fernandez de Enciso. The following year he became a close associate to the governor, Pedrarias Davila. The governor ordered him to arrest Balboa, and he did. Balboa was the former governor. The arrest led to him being made mayor and magistrate of Panama City. In 1524, Francisco Pizarro collaborated with navigator Diego de Almagro and priest Hernando de Luque to explore the Western South America. Their first expedition was not a success at they were faced with bad weather, hostile natives and less food.

In 1526, they set off on a second expedition with two ships and several horses. When they reached San Juan River, Diego went back to Panama for reinforcements, and Bartolome who was the main pilot went south. Ruiz later captured a raft laden which had textiles, ceramic objects and gold and silver pieces. When Ruiz gave Pizarro the news, he was so excited that he set sail for the south. They did hot however get to land since the natives in the area looked dangerous. Almagro later went back to Panama to bring more reinforcements but the new governor Pedro de Los Rios canceled the expedition after it was unsuccessful.

Francisco Pizarro then ordered the men back, and all but Pizarro and thirteen other men came back. The governor later sent one ship to bring back Pizarro, but he did not come back as Almagro and Luque joined him in his expedition. In 1528, they reached Tumbes where they found incredible riche. They planned to go back to Panama and prepare for another expedition. The governor refused their request for a third expedition, and so he went to Spain and appealed to King Charles I. In 1529, Queen Isabel signed the Capitulacion de Toledo allowing Pizarro to go for a third expedition. In 1530, he and his men left for the final expedition. On their way to Tumbes, they encountered Punian natives who attacked them, and they suffered losses. On reaching Tumbes, they found it ransacked. In 1532, they moved to the interior land and formed Miguel de Piura, the first Spanish Settlement in Peru.

Francisco Pizarro married N de Trujillo with who he had a son called Francisco. Francisco Pizarro died on June 26, 1541, after he was assassinated in Lima Castle by supporters of Diego de Almagro II who was Almagro’s son.