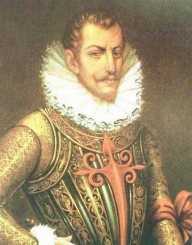 Pedro de Alvarado was a Spanish conqueror and explorer who served as governor of Guatemala.

Pedro de Alvarado y Contreras was born in 1485 in the city of Badajoz, Extremadura, Spain. His parents were Leonor de Contreras and Gomez de Alvarado. He had a twin sister named Sara and brothers named Gomez, Juan, Gonzalo, and Jorge. His family was quite wealthy and prominent.

Sometime around the year 1510, Alvarado went to Santo Domingo, Hispaniola. In 1511, he joined the conquest of Cuba. He then started operating his own hacienda in the newly established Cuban colony. In 1518, he joined the conquest of the Yucatan Peninsula. He commanded one of the four ships in the fleet. He claimed most of the glory for himself, despite the fact that he was not the leader of the mission. In 1519, he took part in the siege of Tenochtitlan, the capital of the Aztec Empire.

In 1524, Alvarado led the conquest of Guatemala. He had thousands of soldiers under his command. He became famous for his extreme brutality. Later that year, he took part in the conquest of El Salvador. His left thigh was badly injured, leaving him almost disabled. His ability to fight was greatly diminished. In 1527, Alvarado became governor of Guatemala, assigned by King Charles V. He also received the military title of Adelantado. In 1532, he received the title of Governor of the Province of Honduras. He decided to decline that position. In 1536, he started sending soldiers and workers to Honduras. He requested his old position back, but the king gave it to someone else.

In 1519, Alvarado began a long-term relationship with the Nahua noblewoman Luisa de Tlaxcala. They had sons named Pedro and Diego and a daughter named Leonor. He also had a son named Gomez and a daughter named Anita with two other women he was involved with. In 1527, he married the Spanish noblewoman Francisca de la Cueva. She passed away shortly after they got married. A decade later, he married her sister, Beatriz de la Cueva. He had no children with either one of his wives.

Alvarado went to the region of Mexico to help the Spanish during the Mixton War. During his time there, he was accidentally trampled by a horse. He passed away from the injuries on July 4, 1541. His body was buried at a local church in a village near Guadalajara, New Spain. Four decades later, his daughter Leonor arranged for his remains to be returned to Guatemala. He was buried at the Santiago de los Caballeros de Guatemala cathedral.

Alvarado is mentioned in Lew Wallace’s novel The Fair God and in C. S. Forester’s novel The Happy Return. He is a character in Lorenzo Ferrero’s opera La Conquista and in Jorge Luis Borges’ story “La Escritura del Dios”.