How compatible are Scorpio women and Scorpio men mentally, emotionally and sexually? Being of the same water sun sign, the Scorpio woman and Scorpio man will connect on many different levels. They understand their partner’s emotional depth and secrets. At the same time, they don’t like being read so thoroughly by their partner. They want to solve each other and remain mysterious.

The female scorpion and the male scorpion notice each other immediately, for both the Scorpio male and female attract attention wherever they go. They are dark and alluring, and people always want to learn more about them. Either gender can make the first move, and they will automatically feel an attraction and a connection with this person.

The Scorpio man Scorpio woman pair is charming and seductive, challenging each other to bring the conversation to new levels to increase the sexual tension. Anyone around them will know to leave them alone, for they are creating magic just by talking to each other. Their banter is quick and sharp, and they take turns leading the discussion.

The Scorpio man and woman are always trying to find out as much as possible about their partner. But at the same time they hold back their own personality to prevent the other person from doing the same thing. It’s a struggle and a dare, but one they readily accept. Because of this, it doesn’t take long for them to move the relationship into the bedroom.

And this is where the Scorpio Scorpio couple changes from a sexy flirtation to a physical powerhouse. While they often hold back in the real world, they let everything go between the sheets.

The Scorpio sun sign couple both enjoy the primal nature of their lovemaking, and they turn up the heat every chance they get. This sexual union doesn’t begin with sparks – it’s a bonfire that turns into a raging wildfire. This kind of love consumes them until they have completely exhausted themselves and their partner.

The Scorpio zodiac sign match can also manage the same balance in their day-to-day lives. Being the assertive and determined sign they are, both the female and male scorpion will be successful in their careers and lifestyles. They are each financially stable, which means they can afford a comfortable household without any argument. 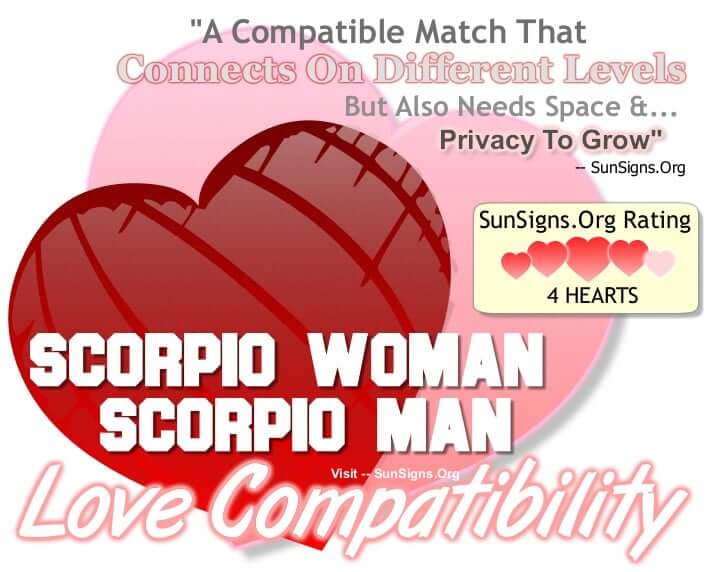 The only problem is that if they are not on equal footing, either the male or the female Scorpio will insist on taking the lead. Neither Scorpio man nor the Scorpio woman wants to relinquish control, and that can make total satisfaction a difficult thing to achieve. Because of this, they will have to compromise to find a good balance between their shared lust and passion.

When it comes down to making a difficult choice will there be tension among the ranks, for they both consider themselves to be efficient decision makers. Their argument will quickly turn into a battle, as each unleashes their stinger on their mate. It won’t be easy for either one to back down, which may cause a stalemate between the two.

They will have to rely on their emotional connection, love compatibility and their understanding of someone with similar personality traits to get themselves out of this bind.

Scorpio is a fixed water sign, the Scorpio woman Scorpio man compatibility gets a FOUR Hearts rating. If the Scorpio Scorpio match can focus on their strengths and realize they share the same weaknesses, they can find that common ground that will help them out of any situation. This will build the kind of respect they need to trust each other. And once they’ve decided this partner is it, they are mated for life.