How compatible are Scorpio women and Libra men mentally, emotionally and sexually? Being next to each other on the zodiac spectrum, the Scorpio woman and Libra man have a lot in common. They both enjoy intellectual pursuits and employ common sense. But they can also be too close and get on each other’s nerves, which will require new goals and compromise.

The female scorpion and the male scale meet easily, as the Scorpio woman is mysterious and alluring and he is a social butterfly. The Libra man notices her immediately, and whoever makes the first move will not be disappointed. Their conversations flow naturally, for the Scorpio woman recognizes he is even more analytical than she is.

The Libra male can see her point of view and argue the counterpoint, something she admires. And he is attracted to her sharp wit and charming nature. His fun and flirty characteristics draw her in, and he spends the night trying to figure out all sides of her personality.

The Scorpio female won’t reveal that much to him, however, making him work for the answers. But the attraction is strong enough for the Scorpio and Libra to move things into the bedroom.

And this is where the watery Scorpio and the airy Libra can spiritually connect, for he is romantic and sensual and she is deep and passionate. The Scorpio woman automatically takes the lead and he stands back, always trying to maintain a balance between her sexual approach and his.

The Libra male can create the perfect scenario and the Scorpio female can bring the lust that completes the picture. If they work together, they can build a very satisfying relationship in the bedroom. But he has to be willing to amplify his physical prowess and she has to try some of his suggestions if they are to meet in the middle.

Each sun sign just has to be willing to put forth the effort. The Libra man does it automatically – it’s in his nature. And if the Scorpio woman loves him, she will do the same for the rest of their lives. The Scorpio Libra relationship can only work out if you both have good love compatibility and understanding. 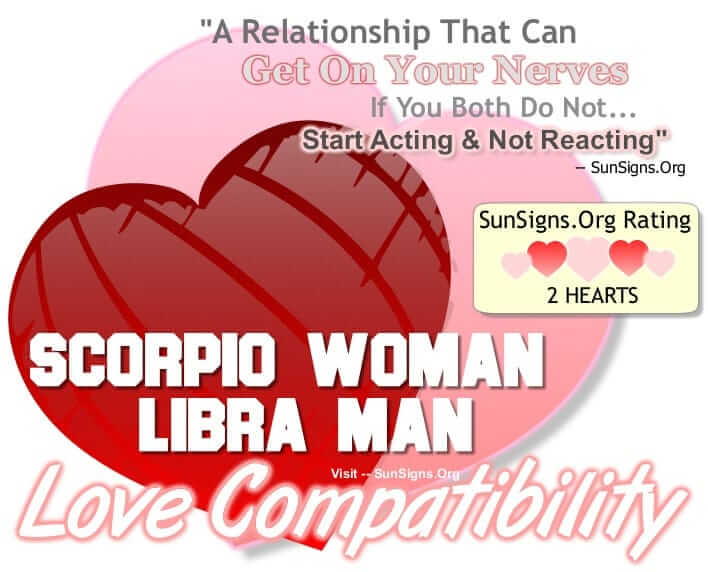 The Libra male’s need for balance will only interfere with his sense of harmony if he feels her dominance is not viable between the sheets. The Scorpio woman won’t relinquish control easily, but she may oblige him if he has ideas that better their sexual union. He experiences their lovemaking mentally and she emotionally, but this doesn’t have to be mutually exclusive.

This will not be complicated on his part, for he does whatever is necessary to keep his mate happy. She, on the other hand, will have to work extra hard to do the same thing.

This is true outside the bedroom as well, for the Libra man’s interest in beautiful things does not match with her more sober tastes. She is fairly straightforward in her words and deeds while he is always on the fence when making decisions. This can drive her crazy, as she needs someone more stable and secure in his life and relationships.

Scorpio women can also be very jealous of Libra men’s tendency to go out and have a good time with other people rather than just her. The Libra man will have to profess his undying love and devotion to her to prevent feeling the lash of her stinger. She, in turn, will have to dial back her more aggressive behaviors.