Scorpio Woman And Aquarius Man – Can Connect Or Clash

How compatible are Scorpio women and Aquarius men mentally, emotionally and sexually? The dynamic personality of the Scorpio woman and the grand nature of the Aquarius man can either connect or clash. They are both equal parts intellect and creativity, and can match each other’s mental strides. But the scorpion’s waters run deep, while the water bearer is up in the clouds.

The air sign Aquarius will most likely make the first move on the water sign Scorpio, for he notices her mysterious character right away. Intrigued by her dark beauty, the Aquarius man needs to analyze this alluring creature and see what makes her tick. And when he strikes up a conversation with her, the Scorpio woman is immediately attracted to his unusual knowledge and insight.

The Aquarius male doesn’t look at things the same way others do, and she is fascinated by his point of view. He, in turn, tries to solve the puzzle that is her personality, and won’t give up until he’s done so. But she’s used to this and doesn’t mind his tenacity.

The Scorpio Aquarius conversations go well into the night and lead to more intense discussions of life, love and all other intellectual pursuits. Aquarius men are so vibrant and full of life that they help to pull the Scorpio women out of the dark waters and into lighter affairs.

And she keeps him on his toes with her mystical nature and witty banter. It’s no surprise when this couple moves their relationship into the bedroom. But the love compatibility between the Scorpio woman and Aquarius man can be very unstable. 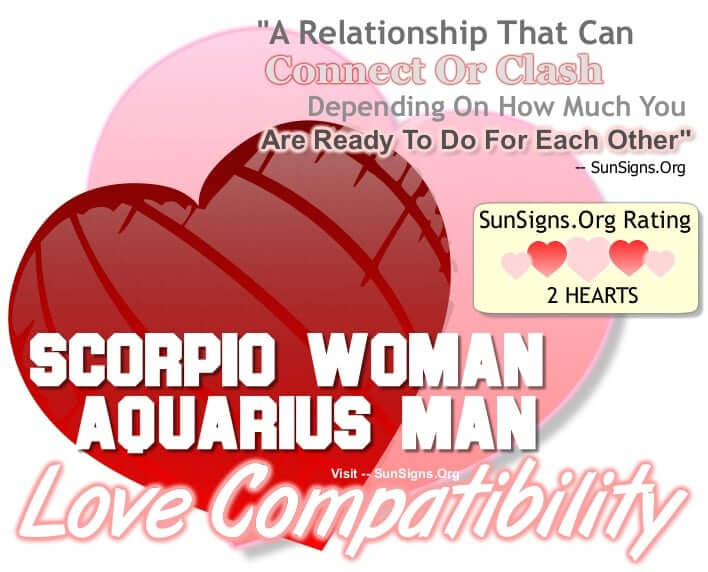 The Scorpio woman Aquarius man relationship might need some work in the bedroom. This is where they may have to work to satisfy each other’s different needs though. For the Scorpio woman, she desires a passionate and intense experience, one that allows her emotions to flow over herself and her partner. But the Aquarius man is always looking at things with his mind, and he needs more mental stimulation to keep things interesting.

The Aquarius male will bring along the mind games and fantasies, and she will join him for a time as long they heighten the passion. But eventually, she may find him too cold or distant, which will be a huge turn-off for her. And for him, the Scorpio female will be too extreme in her lovemaking.

He doesn’t want to go that deep, preferring to keep their sexual union more fun and flirty. The Scorpio and Aquarius couple will have to put forth major effort to find common ground, where she joins him in the cerebral realm and he taps into his feelings more. Only then will they both have a sexually satisfying time.

And this kind of tension can continue outside the bedroom as well if they’re not careful. The Scorpio woman is quite resolute in her words and actions, which is why she often takes the lead in her relationships. But the Aquarius man needs freedom to explore and acquire more knowledge, something she is not often willing to allow.

The Aquarius man will go against her at every turn, which will bring out her stinger. But he is so laidback he won’t react as much as other men, and instead try to reason with her. This may or may not work depending on the situation, but it will help to smooth things over.

He will have to gain her trust by pledging his complete devotion to her, and she will have to trust that he will always return to her. And if she’s willing to go with him on his journeys then that will seal their lasting union.

Scorpio is a fixed water sign whereas Aquarius is a fixed air sign, the Scorpio woman Aquarius man compatibility gets a TWO Hearts rating. This Scorpio Aquarius relationship depends a lot on the personality of the two zodiac signs and how much each one is ready to compromise.