How Do I Summon A Dragon Familiar?

How Do I Summon A Dragon Familiar?

There are many creatures in the metaphysical realm that, with proper prompting, can be coerced into working with a magical practitioner. Among the most powerful are the ancient reptilian lords, the Dragons. These creatures hold the mysteries of the earth in their hooked claws, and may be powerful companions because of it.

Dragons occupy a strange place in human mythology, they are creatures of fire and air, sea and earth, and their personalities range from ravening beasts to wise keepers of knowledge. They can be found in every culture across the globe, they are represented as winged four legged hulking beasts in Western Europe, and long serpentine keepers of wisdom in the east.

The Bible speaks of leviathan, a massive beast, often depicted as a sea serpent tormenting ships and sailors like. The island people have creatures of similar description, and it is much the same wherever you go.

They are known to savor the flesh of maidens, virgins pinioned out for sacrificed to the reptilian lords. They are known to be territorial, largely subterranean in nature, and hunger for all things precious and golden. With these traits you may ask why one would want to have such a terrible beast at their command, and what purpose besides destruction it could serve. 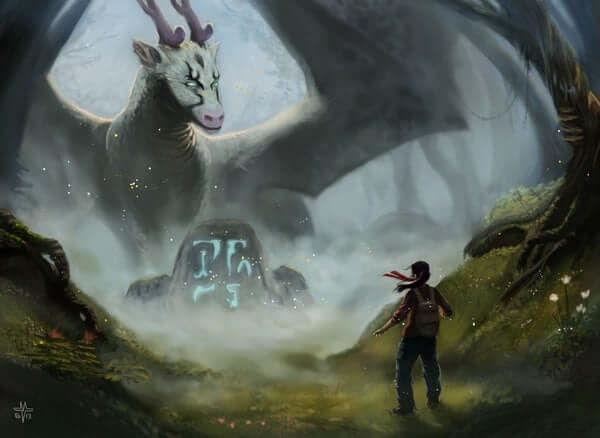 One truth behind Dragons is that they are extinct, they are, but only so far as the mortal world is concerned. Spirits as strong as those of the noble dragon cannot truly be extinguished. Instead they shed their mortal coil, ascending to the plane beyond this one, setting them free of servitude to their own flesh and blood. But some chose to remain to assist those who honored the old ways, and sought to learn of the powers of nature and it’s hidden mysteries.

Summoning a dragon familiar is a task you must take caution with.  For they  are powerful, ancient, and can be quiet destructive if not treated with the utmost respect. The first thing you must have is an appropriate hoard to offer them. Assembling a hoard is a thing to be done with some thought and care. Few of us can choose to present a dragon with a large hoard of Gold and Jewels, and in their current place in the celestial spectrum, it would do them little good.

A dragon’s hoard in this day in age is not measured by it’s monetary worth, but by it’s ingrained power and value to the one they serve. The baubles you select must be special to you in some way, whether in the manner in which they were found, or their significance in acquisition. Heirloom jewelry, a lock of hair of a loved one, a stone or item that appeared to you on a walk that has that ‘significance’ feel to it. Not just any baubles will do.

Once you have collected an offering of this sort, you will proceed out to a place in nature. You must approach a place that is raw and wild, as untouched by human hands as possible, and a place of exceptional appearance. I specifically state appearance as the place may not be beautiful in and of itself, but may have a powerful feel to it. A place that draws dread by it’s magnificence is just as likely to house a dragon as a beautiful forest glade that brings peace. Though you may not want the beast that haunts the former to work with!

Once you have located the place and have the hoard, you must sit in quiet meditation, reaching out with your mind for the Dragon to join you. It may not happen on the first day, or the second, or the seventh. But eventually a Dragon may come to you, and when it does you will know it by the voice in your head, powerful and insistent, or the touch of unseen claws on your shoulder accompanied by an inexplicable weight.

When this encounter occurs, make a verbal offering of your collected hoard, state your intent to the dragon in this working, and ask politely if it will accompany you. Should it choose to come home with you, remember you’ll have to consistently find new baubles to add to it’s collection!

It is polite to ask the dragon’s name, and find a bauble to represent it in it’s hoard, preferably with your help. Once you have acquired a dragon familiar you can ask for it’s help in learning the ways of magic, and to help in the protection of your home and possessions.