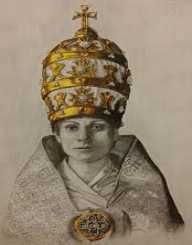 Pope Joan ruled over the Roman Catholic Church approximately between 855 and 857. She lived as a medieval pope for only a few years. Her tale was first told in the 13th-century chronicles and later spread throughout Europe. Today, many scholars dismiss Pope Joan’s existence as only fictional.

She is believed to be talented and also, thought of herself as a man. It is her abilities that saw her rise through the ranks until she handed herself the position of a pope. Her gender became public after she gave birth amidst a procession.

Pope Joan ruled over the Roman Catholic Church approximately between 855 and 857. Although there are claims of her existence as a myth, there is sufficient evidence of the presence of a female pope at one point in time. Pope Joan is said to have grown up in Mainz, Germany. She studied at a monastery built by English missionaries.

Her early education would later receive a series of challenges. During her time, girls could not get an education. Consequently, she had to pretend to be a boy to access studies. She changed her name to John Anglicus when she joined her monk boyfriend in Athens.

Pope Joan first worked as a papal notary within the Vatican. In 855 she successfully won an election to become a pontiff. Scholarly sources are not precise on the exact length of her rule of the church. Some claim that she served for some weeks while others for over two years.

Pope Joan's secret would later come out during a papal procession. On this day, she was heading to the Church of the Lateran in Rome. She experienced contractions on the way, and as a result, she met her death. Sources say her death came with brutality.

The street where she met her death was named the Vicus Papissa (street of the female pope). It could not serve later popes. For a long time now, the events surrounding the existence of Pope Joan has remained intact.