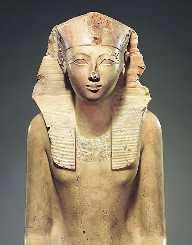 Ruler of Egypt, Hatshepsut was the noblest and powerful pharaoh. She, wait! Yes, she was a female ‘King’ (Pharaoh) in Egypt. Quite unusual, since all rulers in ancient Egypt passed the thrown to either the son.

In some cases, the oldest male of the family took over. It’s a surprise that Hatshepsut ruled without some people’s consent that she was a woman. Archeologists discovered his remain, and after thorough research, it was pointed that she was a She. With all the discoveries, it is still known that she was the second female king to rule Egypt. Hatshepsut served as an Egypt operator or rather a regent. To date, biographers even claim that how she opted out from her previous sit to become a pharaoh is still unknown. Did you know that the queen dressed like pharaoh males? Not only that, but she wore pharaoh’s ‘beard.’ Her history is an open and shut case, stay put.

Hatshepsut was an incredible leader with able skills that made even men join her motives. The noble, dressed like a man since there wasn’t any other way out. Remember, they didn’t have attires for female pharaohs. Her reputation spread far beyond her reach. Why? For twenty years, she established all that was scattered and rendered unproductive.

Her trustworthiness and problem-solving skills brought her into contact with other highness’s. She is first recalled for ushering construction works. In the process, the ripened fruits advanced to unique architectural designs in Egypt.

For a permanent record, Hatshepsut made sure her administration is known by publishing her images on the building across Egypt. Some sources claim that she performed military action to maintain a friendly approach with other nations. At some point, she did this to invade their territories.

Hatshepsut reign proved that a woman could do more than a male. Her leadership surpassed all the leading pharaohs of her time.

The second female pharaoh saw her first in the world in 1458 BC. Several biographers also claim that she was born around 1508 in Thebes, Egypt. She was a daughter to Thutmose I, a famous Egyptian ruler, in the 1550s. Her mother, Ahmose served as the leading female in the royal house.

At only 12, Hatshepsut father breathed his last. This followed with her being compelled to get married. With running thoughts and confusion he married Thutmose II, his half-brother. Early marriage was brought about to avoid them getting into another relationship with the outside party. Remember, they wanted to keep it ease and close as the royal family. Gladly, the marriage crowned her as the queen, and Thutmose II took her father’s lead.

Their union went on smoothly till Thutmose II demise after fifteen years of leadership. At that point, Hatshepsut had clocked thirty years.

The duo didn’t have a son. As an acting queen, the dear female opted to take Thutmose II to sit and rule Egypt. She proposed to rule till Thutmose III, the only male child to Thutmose II reached adulthood.

It wasn’t a doubt that Hatshepsut rule was spotless. She focused more on development and economic growth. She avoided using the word ‘peace’ fraudulently, but her actions spoke louder. Sound environment played host to economic growth plus profitable operations.

Hatshepsut distributed Egypt’s resources wisely and nobly. Health became the first and primary priority for the locals. She made sure that the communities were organized to avoid external conflicts.

The workers weren’t left behind either. Similarly, she supplemented peace by allowing them to take charge. Against all the odds, she spoke against discrimination. In that regard, the act brought forth renovations including several monuments and temples. Major one includes her chamber labeled Dier el Bahari in Thebes.

In short, her significant responsibility was to make sure that Egypt’s economy moved two miles ahead than one. To achieve this, she first improved mutual connection throughout Egypt. Of course, this wasn’t targeted in the ancient reigns.

Hatshepsut problem-solving skills enhanced profitable trading across the borders. Presumably, the heir tried to invade Syria with military skills and able team. It was true she invaded the land, and then her motive succeeded.

Other significant works that the noble lady did was to improve infrastructure and establishments. Egyptians livelihood improved in her tenure. In between, to bring up perfect architecture, she partnered with Ineni, an ancient architect. Another masterpiece that he brought forward was the restoration of ‘Precinct of Mut’ an old site.

Her stance in religion paved the way for the construction of a famous temple called ‘Djeser -djeser.’ Not only that but it was set out as Pharaoh’s resting place. To date, it is still a great masterpiece.

Sources believe that Hatshepsut saw her last in 1458 BC. The female ruler was buried at the first royal tomb called KV20. It was a similar tomb that his biological father rested. Thutmose III took over as the next ruler in line.

After loads of test and analysis from researchers, the prehistorians founded Hatshepsut remains, and that of his father in the same temple in 2006. Some of Ineni’s architect and works of the female ruler appear at the New York Metropolitan Museum of Art.