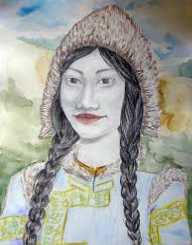 Börte Ujin was the first wife of the famous conqueror and founder of the Mongolian empire Genghis Khan. Although her husband fathered a lot of other children from different women, only her children were considered by the people as Great Khans. She also holds the title as the Grand Empress of the Mongolian Empire and also served at the first Court of Genghis Khan as the head.

Not much is known about the life of Börte Ujin She was described as having a fair complexion and an intelligent individual. Records had shown that she was betrothed to Khan when they were children as it was customary at the time, and also as a way to strengthen their families.

Börte Ujin was at the age of 10, and Khan when he was nine years old when they became engaged. They were later married when she was 17 but shortly after, got kidnapped by a rival tribe.

The tribe responsible for the kidnappings were the Three Merkits of which one of the captors claimed Ujin as his wife. She was their captive for eight months before Khan and 2 of his allies, Jamukha, and Wang Khan, rescued her from them.

Shortly after her rescue, she gave birth to her first child and named him Jochi. However, people have questioned the identity of her child’s father since she was captured a time and might be impregnated by one of her captors. Regardless of this, Khan still accepted and raised Jochi as one of his own.

Aside from Jochi, she also bore three other sons for Khan named Chagatai, Ogedei, and Tolui and five daughters named Kua, Alakhai, Tumelun, Alatlun, and Checheikhen.


The Grande Empress of Mongolia

While Genghis Khan continued to expand his empire, Börte Ujin stayed behind to manage the lands. She assisted his brother in Temuge in tending the land. Ujin was given authority to rule and control most of the Kherlen River which was previously owned by the Tatars.