How compatible are Aquarius women and Pisces men mentally, emotionally and sexually? The similarities between the Aquarius woman and Pisces man may outweigh their differences if there is a great attraction. Both are intelligent and unique personalities, making them a good match. But she is more cerebral and he is more emotional, and this is where their opposing natures can collide.

If the female water bearer comes across the male fish, they are most likely at an intimate gathering or perhaps a business conference. The Pisces man is an introvert who doesn’t like to go out much, but the Aquarius woman as the extrovert will find him alone in the corner and chat him up.

The Aquarius female notices immediately how intuitive he is, much more so than many other men she meets. It’s because, as a water sign, he’s so in touch with his emotions and is able to read other people’s feelings and moods. That’s how the Pisces male recognizes her admiration for a quick wit and creative thinking.

The Aquarius and Pisces connect on this level, but differ in their thought process. She is fairly logical, always seeing things from a rare perspective, while he is more of a dreamer. Even though they can both think up unusual ideas and theories they approach it from opposite angles. But it’s this kind of love compatibility that leads this relationship into the bedroom. 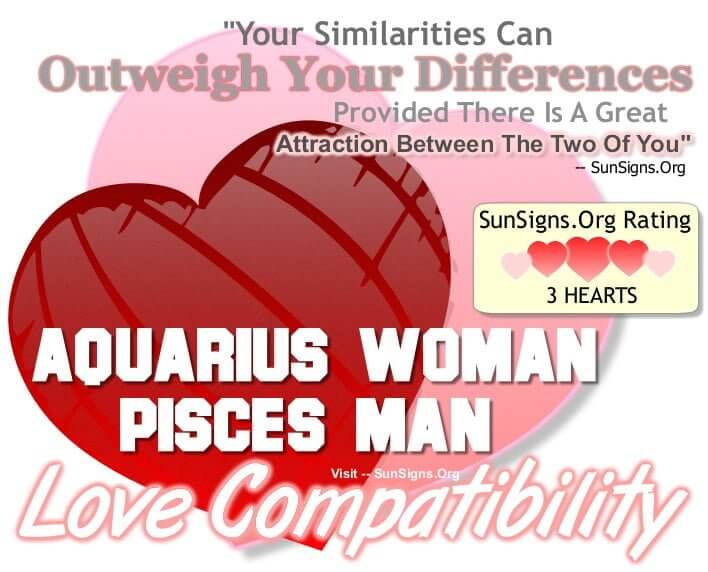 The Aquarius woman Pisces man personalities will diverge a bit more when it comes to sex, for as an air sign she experiences their lovemaking on a mental plain and he feels it on an emotional one. While they both have their heads in the clouds, he’s much more in tune with her than she is with him.

The Pisces man wants her to swim the depths of their sexual union with him and she’s just in it to have a good time. In fact, the Aquarius woman may come off as cool and detached to his more sensitive nature, and this is where he will want to swim below the surface to escape her aloofness. But if the Pisces male does she may not pursue him

The Aquarius female is not as invested in the relationship yet as he is. While he takes time deciding the right course of action, she flies ahead without worrying about the consequences.

The Pisces man will have to let loose and live in the moment with her if he wants to keep her attention, and she will have to be careful not to upset his delicate sensibilities if she truly cares about him.

Such is the theme if they want to continue a satisfactory relationship outside the bedroom as well, for they have separate opinions on how to live their life together. The Aquarius woman is always on the go, not wanting to stand still for too long or else things will get stale. He, on the other hand, is a homebody who would rather stay in with his partner.

The Pisces man will have to allow her to lead him down an unknown path, and she will have to stop moving long enough to give him the reassurance he needs that she is committed to their union. For she can come off as distant even when she is with him, and he can be emotionally overbearing for her.

Aquarius is a fixed air sign whereas Pisces is a mutable water sign, the Aquarius woman man compatibility gets a THREE Hearts rating. A compromise is necessary to keep the Aquarius Pisces match happy. But if the Aquarius woman can learn patience from her Pisces man, and he can learn to be spontaneous from his airy queen, they will find common ground to suit both their needs.