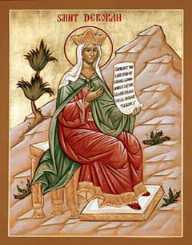 A prophetess and the fourth judge of pre-monarchic Israel, Deborah was an intelligent and hard-working lady. She energized the Israelites to prevail over their Canaanite persecutors by a remarkable conquest over them. Her name Deborah means bee and given her performance; the name ideally suited her. She was the only female judge to find a mention in the Bible.

The name of her husband was Lapidoth. History does not have any record of her bearing children in any stage of her life. Deborah used to sit under a date palm tree near Bethel and held a court giving her wise judgment to the assembled people of Israel. Jabin, the King of the neighboring province of Canaan regularly harassed the Hebrew people of Israel intimidating them with his superior military power.

Paying Back The King of Canaan In The Same  Coin

Deborah was fed up with the constant harassment and intimidation meted out to the Hebrews of Israel by the Canaan king. She asked Barak, a Hebrew man from Naphtali, to take up the challenge of containing the Canaanites.

Barak, on his part, asserted that he would only lead an army to conquer the Canaanites if Deborah accompanies him in the mission. Deborah consented to the proposal but kept a condition. According to her condition, Barak had to give credits for the accomplishment of the task to a woman.

Accordingly, a small army of the Israeli force confronted the Canaanites head on. In the ensuing battle, fortune favored the brave warriors of the Israelites. A terrible rainstorm lashed the battlefield. The Canaanites found it impossible to maneuver their heavy iron chariots due to such massive downpour. To make matters worse, the river Kishon swelled to the brim.

Panicked Canaanites backtracked hurriedly, creating a lot of chaos and confusion. The commander of the Canaanite troupe, Sisera stopped at a place to rest during the retreat. He tried to take shelter in a tent owned by a Hebrew woman named Jael.

When Sisera asked her for a drink, she fed him with a glass of milk. However, when Sisera was asleep, she killed him by hammering a tent pin into his temple. Upon the comprehensive defeat of the Canaanites, peace prevailed over the region for the next 40 years.


The Song of Deborah

The song of Deborah is a victory hymn. Both Deborah and Barak sang the song after their conquest of Canaan. The Old Testament Book of Judges finds mention of this song. It is there in one of the oldest parts of the Bible.

The song was penned down during the 12th century BCE. The grammar and context of the song confirm this fact. According to History, the song is also one of the exquisite representations of ancient Hebrew poetry still in existence.

The story of Deborah itself is a fascinating one. She was a female character in the before Christ era. Women at that time remained as a mere subordinate to their male counterparts. Society considered them to be inferior to male human beings. This is the reason why Deborah assumes so much significance in the history of humanity.

The recognition, respect, and appreciation she earned in that era is in itself a remarkable achievement. Her stature can be gauged from the fact that Barak sought her presence while going to confront the Canaanites.

The world remembers her for her insightful and intelligent judgments which she used to deliver in her court where Hebrews from all over Israel assembled to listen to the same. Deborah went for her heavenly abode in the year 1067 BC.